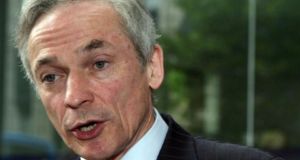 Minister for Enterprise Richard Bruton said there was “room for improvement” at Irish Water and that senior management would be held accountable.

Minister for Enterprise Richard Bruton has defended the Government’s handling of bonuses at Irish Water, saying such payments were a matter for the company.

It was revealed today that Irish Water employees who achieve a “need improvement” rating will still be entitled to a bonus payment ranging from 1.5 per cent to 9 per cent, depending on their salary – senior staff being entitled to a greater payout.

According to RTÉ, staff who meet expectations can expect an award of between 2.75 per cent to 14 per cent while those who consistently far exceed expectations could look forward to a bonus of up to 19 per cent.

Responding to news that workers at the company can receive bonuses even if their performance needs improvement, Mr Bruton said the Government does not control the Irish Water pay model below director and chief executive level.

“There is a freedom given to a commercial body to set its model but they have to be accountable and perform against very clear targets,” he said.

Newspaper reports this morning suggested senior Government figures want to replace Irish Water chief executive John Tierney and the company’s board after a series of controversies.

Asked about these reports, Mr Bruton told RTÉ there was “room for improvement” at Irish Water.

“This is a difficult process. I think there’s a lot of management to be done. There are certainly mistakes being made, there is certainly room for improvement. There will be scrutiny of performance and that’s what we expect from a professional body that we’re putting in place.”

Fianna Fáil leader Micheál Martin said bonuses at Irish Water would further anger the public facing new water charges. He said the issue “personifies the degree to which this whole debacle has alienated public opinion in relation to the whole water charges issue.

“The idea that people could be getting up to 19 per cent bonuses simply to ensure that bills go to a household I think will anger people even more.”