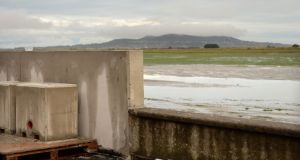 A view of Howth from the behind new sea wall being built next to the old wall at Dollymount, opposite St Anne’s Park, Dublin. Photograph: Dara Mac Dónaill/The Irish Times

Residents of Clontarf are appealing to Dublin City Council to halt construction of flood defences opposite Bull Island nature sanctuary, claiming the new sea wall is several feet higher than agreed. The new wall is being built as part of a €5 million 2km cycle path from the Wooden Bridge to Causeway Road.

Residents said they had been assured by the council it would be no higher than the existing stone wall at the entrance to the bridge. However,they said the new poured concrete wall, now under construction in sections along the coast, appeared to be considerably higher.

“We were told it wouldn’t be higher than the existing wall and we believed that would be the case and people would be able to see the sea over wall, but it is several feet higher and they can’t,” Deirdre Tobin, chairwoman of the Clontarf Residents’ Association said.

The council’s planning documents refer to a “flood defence level of 4.25m O.D.” An ordnance datum, or OD, is a way of determining heights on maps and usually refers to the height above sea level. However Ms Tobin said this was not explained to residents.

Residents have been locked in a long-running battle with the council over construction of flood defences along the coast. The council secured planning permission from An Bord Pleanála in 2008 to build flood defences up to 2.75m involving earthen embankments and walls.

It could have gone ahead with the scheme, but following objections from locals, it offered to reduce the protective embankment to 2.17m, the lowest height permitted by An Bord Pleanála.

Despite an “extreme tidal event” in February 2002 and a less severe one in October 2004, both of which caused damage to Clontarf homes and businesses, the council said it received more than 2,000 submissions “virtually wholly opposed” to the project going ahead, even in its modified form. Locals had described the defences as a “cheap and nasty solution” and an “eyesore” .

The council appointed a conciliator to resolve issues between it and the residents, but agreement on heights for the section running from the beginning of the coastal promenade at Alfie Byrne Road towards the Wooden Bridge has yet to be reached. Ms Tobin said the council’s recent behaviour did not bode well for reaching an agreement. “If they get away with what they’re doing now, will they try to have this wall all the way along?”

Independent councillor Damian O’Farrell has asked council chief executive Owen Keegan to stop work until after an information meeting scheduled for November 5th, but he said he had yet to receive a response.

“The information given to residents clearly wasn’t good enough. I also think it was disingenuous to put flood defences in with the cycle project. I’d ask for work to pause until this matter can be clarified.” The section in question was protected from tidal flooding by Bull Island and had “never flooded in living memory”, Mr O’Farrell added.

The council said it was aware of residents’ concerns and that engineering staff would be discussing the matter in advance of the November 5th meeting.