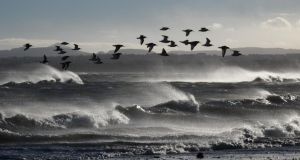 Dublin Bay: The Sandymount and Merrion Residents’ Association lost its challenge this week to the proposed expansion of the plant and the construction of an outflow tunnel into the bay. Photograph: Frank Miller

will face costs from its failed court action against the development.

The Sandymount and Merrion Residents’ Association lost its challenge this week to the proposed expansion of the plant and the construction of an outflow tunnel into Dublin Bay.

Mr Justice Peter Charleton dismissed on all grounds the challenge by the association to An Bord Pleanála’s decision to grant permission to Dublin City Council for the planned extension of the Ringsend plant.

The council had argued the extension is critical as the existing plant is unable to cater for the city’s expanding population.

Lawyers for An Bord Pleanála and the State indicated they would not seek costs against the residents but Dublin City Council yesterday said it would “make its position clear” on the matter of costs in court next Tuesday.

A spokeswoman for the association said it would decide by the beginning of next week whether to lodge an appeal.

The judicial review had delayed construction of the facility but it would go out to tender in the first half of next year, it said, with a contract awarded next year or in 2015.

It would then take two years to build the treatment plant extension and up to 3½ years to finish the tunnel.

‘Design load’
The current plant continues to operate above its “design load” and there is no spare capacity to deal with any increase, the council said.

It said the extension was needed to address the overloading issue and to ensure the plant achieved full compliance with requirements of the urban waste water treatment directive. It added: “The council will continue to operate the plant to achieve the maximum performance in terms of the quantity of load treated and quality of effluent emissions.

“Nevertheless it is paramount that the extension project progressed to address the overloading issue and to ensure that the plant achieved full compliance . . .”

The residents had contended that the proposed development failed to take into account the designation of an area from Rockabill to Dalkey Island as a special area of conservation (SAC) by the Minister for Arts, Heritage and the Gaeltacht in December 2012. This decision came a month after An Bord Pleanála had granted permission for the Ringsend plant extension.