Juvenile animal thought to have died on sands from suffocation 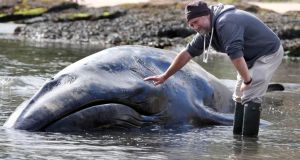 Ian Enlander, from the Irish Whale and Dolphin organisation, checks a rare nine metre long Sei whale which was discovered on a small beach in Waterfoot, Co Antrim. It died from suffocation, an expert said. Photograph: Paul Faith/PA Wire

A rare six-metre whale has beached on the Antrim coast and died.

The sei whale is thought to have been a juvenile which became separated from its mother and lost its way.

It was found on the small beach today at Waterfoot, Glenariff, and prompted a traffic jam in the small village as word spread. Sight-seers turned out in numbers causing police to intervene.

The whale was still alive when discovered but was considered to be too weak to attempt to drag it back out to sea. It is thought to have died shortly afterwards from suffocation.

Ian Enlander, from the Irish Whale and Dolphin organisation, told the BBC: “Initially the immediate response people were feeling was ‘well, there’s got to be something we can do’, but I felt my purpose here was really explaining to people what was happening and why we shouldn’t be in the water tying ropes to its tail and dragging it off, because all you’re going to do is cause more distress and spinal injuries to the animal.”

“It was probably travelling with its mother and has become separated,” he explained. “It probably became disorientated and became trapped.”

The sei whale is commonly found in deep ocean waters but is relatively uncommon in shallower seas. It also avoids warmer waters as well as polar regions.

Adult sei whales commonly grow to around 20 metres and can reach 28 tonnes weight. Despite their size they can swim as unusually high speeds, reaching nearly 50kph in short bursts.

They were once targeted by whaling ships and are regarded as an endangered species.