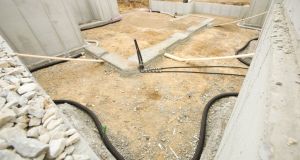 A radon mitigation system in the basement of a house. The EPA is calling on people in high radon areas to test their homes for the gas. File photograph: iStock

Residents of a house in Co Wicklow were exposed to a radiation dose which was equivalent to 56 chest X-rays a day because of the amount of radon in the area, the Environmental Protection Agency (EPA) has said.

The home was found to have more than 80 times the national acceptable level of radon.

Co Wicklow has been identified as one of a dozen “priority” counties for tackling the carcinogenic gas.

The EPA is calling on people in high radon areas to test their homes for the gas.

About 4,700 homeowners have tested their homes in the past six years and 733 homes were found to have raised radon levels.

Radon is second only to smoking as the leading cause of lung cancer in Ireland.

It is estimated that some 250 lung cancer cases each year in Ireland are linked to radon exposure.

Radon is a radioactive gas that is formed naturally in the ground from the radioactive decay of uranium, which is present in all rocks and soils.

It has no smell, colour or taste and can only be detected using radon detectors.

However, when it enters an enclosed space such as a house or other building, it can accumulate to high concentrations.

The cost of testing a home for radon is about €50. Two small detectors are sent to the home and placed in the bedroom and living room.

After three months, the detectors are returned to the testing company to be analysed.

The results are then given to the homeowner, with some advice on what to do next.

To find out if your house is in a high radon area, you can type your address into the interactive radon map on the EPA’s website.

‘Overwhelming’ support for pedestrianisation of area around Grafton Street