Rabbitte insists power lines will be installed above ground 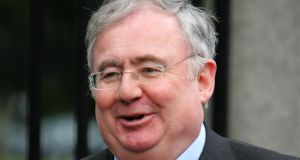 Minister for Energy Pat Rabbitte has insisted the construction of electricity pylons will take place above ground after calls to build them below ground due to fears over safety and aesthetics.

Independent Senator Rónán Mullen claimed some of the pylons carrying the high-voltage lines “could be taller than a five-storey building”.

Speaking on RTÉ’s Morning Ireland yesterday, Mr Rabbitte said it was not necessary to put the lines underground. “It is not necessary, and it doesn’t happen elsewhere in Europe, contrary to what was being asserted.

“Three international experts were brought in to do an assessment of the cost of undergrounding part or all of the system. They established that it would cost just over three times what it would cost to put in overhead power lines.”

Speaking on the same programme, Fianna Fáil’s Dara Calleary said the move could damage tourism. “Where you’re driving it through communities, through schools, through areas of high scenic value, which in turn contribute to the tourism economy – where you can’t stand over or give absolute guarantees on the health side of things – it should be underground.”