Applications from homeowners to be processed early next year 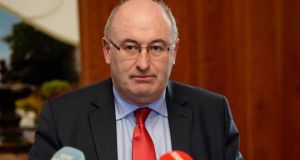 Minister for the Environment Phil Hogan

Legislation which will see the taxpayer foot the bill for the repair of pyrite-damaged homes has been approved by Government.

Minister for the Environment Phil Hogan announced two months ago that plans to levy the insurance and quarrying industries for the cost of repairing thousands of homes damaged by pyrite used in their construction had been shelved.

The Pyrite Resolution Bill, which is due to be enacted by the end of this year, will enable the processing of applications from affected homeowners. Remediation works will be able to start early in the new year, Mr Hogan said.

Kick start
“The Government has previously approved €10 million initial funding to kick start the scheme, with additional funding to be allocated over the next two years.”

The scheme will operate under the auspices of the Pyrite Resolution Board which estimates there are up to 1,000 dwellings requiring immediate remediation due to pyritic heave.