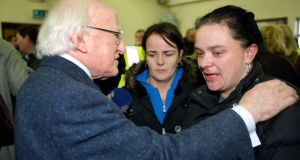 The people of Cork hit by flooding last week deserve the best possible solution in the shortest possible time, President Michael D Higgins said today as he saluted the resilience of city traders during a visit to the affected areas.

Accompanied by the Lord Mayor of Cork, Cllr Catherine Clancy and Cork City Manager, Tim Lucey, Mr Higgins went on a tour of Oliver Plunkett Street and adjoining streets where businesses were flooded to a depth of up to three feet last Monday and Tuesday.

“People here in Cork have just shown fantastic resilience,” said Mr Higgins after he was introduced to many of the affected traders by Claire Nash of the Cork Business Association whose own restaurant Nash 19 ended up under several feet of water.

“It was wonderful to see the services responding as well as the community and the images I saw on television from here in Cork showing people co-operating with each other in extraordinary ways was very impressive,” said Mr Higgins.

‘Best of Irishness’
“It was extraordinary thing to witness, it was the best of Irishness in my view – as we would say in Irish “Is ar scath na chéile, a mhaireann na daoine” – people coming to the assistance of each other with a sense of urgency – it was hugely impressive.”

Among the businesses which Mr Higgins visited was Liam Ó Ruiseal’s bookshop on Oliver Plunkett Street where flood waters poured in to a depth of over two feet and some stands collapsed, plunging hundreds of books into the flood waters.

Brid Hughes of Liam Ó Ruiseal said: “President Higgins was very sympathetic – we had met him before at a book signing in Ballyphehane a couple of years ago so he remembered us – he was very interested in how we were managing and commended us on our resilience.”

Frustration of traders
Asked if he could understands the frustration of traders in Cork with the fact that it may be 2018 before a flood relief system is in place, President Higgins said that he couldn’t comment on government policy but people did deserve as quick a solution as possible.