Pollution kills hundreds of fish in Tolka River in Dublin

Dublin City Council and Inland Fisheries Ireland are investigating the source of pollution which has killed hundreds of fish in the River Tolka on Dublin’s northside. Video: Darragh Bambrick 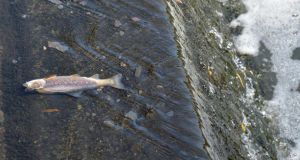 A stretch of the Tolka River running through Griffith Park, which appears to be polluted with a detergent-like foam which has killed hundreds of fish over a 2km stretch of the river. Photograph: Alan Betson / The Irish Times 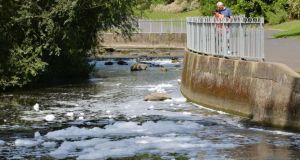 Dublin City Council and Inland Fisheries Ireland are investigating the source of pollution, which has killed hundreds of fish in the River Tolka on Dublin’s northside. Photograph: Alan Betson / The Irish Times

Dublin City Council and Inland Fisheries Ireland are investigating the source of pollution, which has killed hundreds of fish in the River Tolka on Dublin’s northside.

The waterway has become choked with a white foam over a 2km stretch from the Finglas Road Bridge near Glasnevin Cemetery, to Griffith Park, a section which runs near the National Botanic Gardens.

The river has been repopulated with trout and salmon in recent years following a significant improvement in the cleanliness of the waters.

The fisheries body said the full extent of the kill has yet to be quantified, but hundreds of dead fish were visible in the shallow waters today.

Large brown trout up to 3lbs in size were among the fish killed.

“Inland Fisheries Ireland and Dublin City Council are continuing their emergency response and associated investigations in an effort to establish the source of any contaminating material that may have caused this major pollution event,” a spokesman said.

“I’m also calling on the EPA to take whatever action can be done to limit the impact of this incident on the river body.

Earlier this year, we were celebrating the return of spawning salmon to the river after a one hundred year absence.

It would be shameful if this incident destroys the painstaking work that has been undertaken to clean up the river,” Mr Cuffe said.

“I am urging the EPA to work swiftly with Dublin City Council and the Gardaí to tackle this incident, prosecute those responsible, and ensure it does not happen again.”

A spokeswoman for the EPA said it would only become involved if the city council notified it that the pollution had come from a facility licensed by the agency.

1 One hundred Irish retailers for all your online Christmas shopping
2 People who throw house parties can be fined €1,000 and jailed for up to a month under planned law
3 Covid-19: Backlog forces HSE to skip calls to thousands of close contacts
4 Covid-19: Six weeks of lockdown hardship offers little by way of end reward
5 'It’s his dishonesty, lack of character, his deceit' - ex-CIA chief excoriates Trump
Real news has value SUBSCRIBE