‘People are getting rid of dogs before Christmas’

DSPCA are calling on families to adopt not buy their pets this Christmas. Unwanted puppies bought at previous Christmas are now filling the DSPCA centre in Dublin. 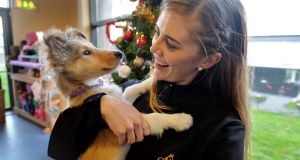 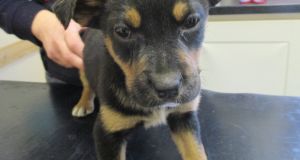 One of five puppies (seven weeks old) found dumped in a cardboard box in north Cork this week. Puppies were sick and weak. 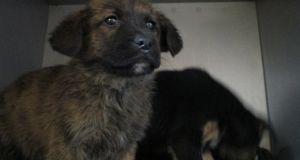 One of five puppies (seven weeks old) found dumped in a cardboard box in north Cork this week. Puppies were sick and weak.

Just a click of a door handle was enough to spring a group of rescued abandoned puppies with into action in an attempt to grab some attention.

Eyes-wide open with excitement they stretched their little bodies as far as they can to peer excitedly against the window pane to see who was coming their way.

A hand gesture from a visitor was enough to knock a few off their feet as their frantic tail wagging and enthusiasm to get closer overwhelmed them.

These puppies are some the growing number of abandoned dogs counted in the hundreds across the country in recent weeks.

Brian Gillen, chief executive of the Dublin Society for Prevention of Cruelty to Animals (DSPCA), says while they are emphasising their annual message asking people not give a dog as a gift for Christmas, their centre is already full-up of unwanted pets in the lead up to the festive season.

This is despite thousands of dogs advertised online with some sellers charging up to €3,000 per puppy.

Gillen says the society had taken in more than 80 unwanted puppies in the last two weeks.

“That’s a whole new development this year, puppies being surrendered pre-Christmas,” he says.

“It’s the newest trend, people trying to get rid of dogs coming into Christmas.”

Gillen says the introduction of legislation for mandatory microchipping of puppies in September this year was welcome but one of the reasons for the sudden increase.

Dog owners can face a fine of up to €5,000 for not microchipping their puppy and the rule will be extended to all dogs in March next year.

Gillen says the cost varied from €25-50 at veterinary clinics but there were programmes for free microchipping for people on social welfare.

“People who have a litter by accident end up with a rather large bill from their vet, six microchips and six vaccines maybe in €250 to €300,” he says.

To cope with the higher than normal numbers, the centre is urging people to consider fostering a pet for two weeks over Christmas and the New Year.

“It will give people the opportunity to know what it’s like to have a pet and to give the animals a break from being in the shelter, it does benefit them,” he says.

In one kennel at the centre, another group of puppies clamber forward to a familiar volunteer eager to lavish licks.

One tiny tan-coloured chihuahua called Billy, found abandoned on the side of the road at five weeks old, is more cautious than the rest and slowly approaches with his head down. It only takes a couple of minutes before Billy has the courage to make eye contact.

His terrier roommates dart around in circles running back for intermittent pats in the head. Potential foster owners walk around struggling to decide which ones to take.

One woman in reception, who was holding a black and white border collie cross in her arms, says she had come to foster to pup for a few weeks but after holding her for a few minutes was adamant she was “never giving her back”.

The rough-haired and sweet-natured collie, whose leg had not grown properly but was healing well, arrived at the centre at three weeks old and luckily was accepted by a surrogate mother.

Operations manager Graham O’Brien says high numbers of older dogs were also being surrendered in the lead up to Christmas but the centre has no space.

O’Brien says he received up to 20 calls a day from owners who said they could no longer keep their pets.

One of the longer-term residents of the centre, boxer Ellie, knows the struggle to find a permanent home.

The six-year-old dog sat in her kennel with her back half turned to the viewing pane although her large brown eyes could not resist taking a glance back at people who had stopped to take an interest in her.

Outside, her muscular frame was full of energy and her head high as she walked on the green. “She’s very affectionate toward people, she’ll make a great pet,” her handler says as Ellie gives her a few quick licks.

Ellie is not alone, beside her kennel is a lurcher call Bash, found wandering the roads with an injured leg and a shoelace tied around his neck.

Next door to him lay a Staffordshire called Dude, just two years old, and opposite a German shepherd who had become “too big for his owners” at 18 months old.

Despite the growing number of unwanted dogs around this time of year, the sale of dogs remains a lucrative business in Ireland.

ISPCA chief inspector Conor Dowling says there were about 72 registered dog breeding establishments in Ireland. At least two are operating with more than 300 breeding females.

“The market is so saturated it makes homing quite difficult, there are so many dogs floating around,” he says.

The organisation still comes across illegal puppy farms from time to time. This year, the ISPCA had instigated 32 prosecutions, up from 25 last year.

“Up until 2010, there was no regulation of the industry at all. We were given authorised status in early 2014. We’re taking more prosecutions than ever before,” he says.

“We’ve come across more places of concern this year but that’s not necessarily an indication things have got worse; it might be we’ve stumbled across them.”

Dog owners with six or more breeding females are obliged to apply to their local council for a licence. The mandatory microchipping programme will be expanded to all dogs in March 2016.

The raid on Myshall farm in Co Carlow, where more than 340 dogs were rescued along with a number of other animals, was the biggest this year.

The investigation is ongoing as Mr Dowling says many cases take an average of 12 months to get to court.

Mr Dowling says most people buy their dogs online and the Irish Pet Advertising Advisory Group (paag.ie), launched this year in response to concerns about the welfare of animals advertised on sites, was important.

The IPAAG is a coalition of animal welfare organisations, representatives from the veterinary profession and websites that advertise animals for sale.

“It’s far more beneficial for us to work with people who are advertising to standards to make sure they require certain standards and help protect the animals,” he says.

DoneDeal , one of Ireland’s biggest classified advert sites, said they rejected on average about 47 per cent of advertisements submitted for dogs.

“DoneDeal regularly monitors all animal related adverts and reserves the right to report suspected illegal activity related to animals to the gardaí, PSNI, the ISPCA and any other authority,” it said.

Dogs.ie chief executive Paul Savage says with the introduction of compulsory microchipping, they would reject adverts with puppies that did not have the chip.

Savage says the number of new users registering with the site, created in 2007, was up by 30 per cent on last year.

Irish Kennel Club president Sean Delmar says they have a register for purebred dogs in Ireland running since 2006.

“However, we don’t have any legal right or enforced right to enter anybody’s premises, that can only be State people like dog wardens and an Garda Síochána, ” he adds.

Delmar says the organisation had a code of ethics dog owners had to sign to register. “If you get trouble with the breeders, we will deal with them and follow it up.”

Delmar says complaints or notices on people who have been convicted of mistreatment or cruelty on dogs received a lifetime ban.

“For these people who are breeding for money that would be a restrictive for them as a IKC pedigree gives added value,” he adds.

Delmar says compulsory microchipping would make a difference to people abandoning dogs in the future as their history could be easily tracked.

Panel: Thinking of getting a dog?

Make sure your puppy is at least eight-weeks-old.

Research the breed before you buy.

Consider adopting from a local rescue.

If not, ask your local vet or Irish Kennel Club for recommendations on where to buy.

Ask for a copy of the dog’s medical records.

Ask where the puppy came from and ask for its previous history records.

Never buy a dog without seeing the premises the puppies and mother are kept.

Do not agree to meet in places like car parks or pubs.

Do not buy a puppy because you feel sorry for it.