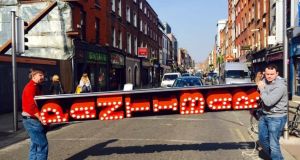 Thousands of people have signed an online petition calling for the retention of the Pantibar sign outside the eponymous gay bar on Dublin’s Capel Street after Dublin City Council directed its removal.

The council had received three complaints in relation to the sign.

Pat Coyne, with an address in Dublin 7, said the sign had “no artistic merit and detracts from the dignity of both the structure and the streetscape”.

Kenneth O’Reilly, also from Dublin 7, said the sign reflected into his home and that its retention would “not be a positive step in the overall identity of Capel Street and the area as a whole”.

Brendan Hade, with an address in Dublin 1, said the sign was not attached to Pantibar but to a property in his ownership, and that it “causes a major light ingress into the living area” of his apartment.

Dublin City Council has directed the sign be removed on the basis that it is located in an “architectural conservation area”.

“It is considered that the proposed sign to be retained by reasons of its projecting nature, size and scale in conjunction with its location above street level and its use of inappropriate materials and lighting would impact adversely on the character and integrity of the area, significantly detract from the visual amenities of the area and set an undesirable precedent for similar development in this area.”

The owner of Pantibar, Rory O’Neill, also known as Panti Bliss, told The Irish Times he will be appealing the decision to An Bord Pleanála.

“We originally didn’t think we would need planning permission as there had been a standard illuminated Carlsberg sign there before,” he said.

“We applied for planning permission and were refused on what I think are silly grounds, and all of which I vehemently disagree with.

“The sign is of social, cultural and artistic value, and I strongly believe that. I absolutely reject some of the things they have said.

“It’s been designed to fit perfectly in sync with the building. They claim it’s inappropriate material, which I reject because there is nothing inappropriate about acrylic, which has been in use since the 1800s. Capel Street is not a museum.”

He said the sign “wasn’t a thoughtless edition” to the bar and that a lot of effort had gone into planning and designing it.

“I love our sign,” he said. “It was really considered. We take visual communications really seriously at Pantibar.

“I’ve a background in design myself and we spent a lot of money on the sign, not to mention time spent trying to find an Irish company that could make it to our specific design. The company we eventually found did it with great pride and care.

“We designed it so it would look good both in the day and night. It perfectly suits where it is and is in harmony with the street.

“It’s already an iconic structure. Tourists are outside every day taking photographs. I won’t give it up easily.”