Over €1m donated for marine and energy research 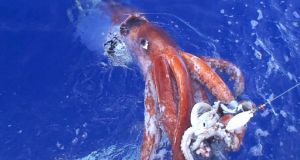 A giant squid. A member of the research team from the Ryan Institute at NUI Galway was involved in new findings on the invertebrate.

NUI Galway has been given a philanthropic gift of over €1 million for marine, environmental and energy research.

The donation, which the university has welcomed as “significant”, has been made by the charitable trust established in memory of the founder of Ryanair, Tony Ryan.

Dr Ryan, who died in 2007, had already established a marine research institute at NUI Galway (NUIG), named after his father, Martin Ryan.

The new funding will support research scholarhips for five PhD students focusing on marine, environment and energy research programmes. It will also provide financial assistance under the university’s access programme for students.

Priority areas for the funding include innovation in energy-efficient technologies and bio-energy, and research and development in aquaculture, fisheries, offshore and renewable energy resources.

Research on development of technologies for monitoring, modelling and mitigation of environmental pressures may also qualify.

“We are proud to support so many Irish and migrant students to access NUIG’s degree programmes with €125,000 per year for four years,” trust spokeswoman Emma Lane-Spollen said.

An annual Ryan Institute Award over five years is also to be established which aims to nurture business ideas arising from research.

NUIG president Jim Browne has paid tribute to the late Dr Ryan and his family for their “vision and enlightened philanthropy”.

The Tony Ryan Trust was incorporated on December 10th, 2009, with the core objectives of the advancement of education and religion, the relief of poverty and other works of a charitable nature. Dr Ryan, former Guinness Peat Aviation chief executive, bequeathed €10 million to the trust.

NUIG’s Ryan Institute director Colin Brown also welcomed the donation, which would, he said, help to “realise the bright minds of the future”.

The institute on the NUIG campus has more than 300 researchers, focusing on key areas such as climate change, water resources, marine ecosystems, biodiversity and sustainability.

One of its research team, Louise Allcock, was involved in new findings on giant squid published this week by the Proceedings of the Royal Society journal.

The paper by a research team led by the University of Copenhagen established there is only one single global population of giant squid.

Scientists had thought there were several types of giant squid, depicted as a “Kraken” or sea monster in Alfred Tennyson’s 19th century sonnet.