Terns are small migratory seabirds. A colony of them has nested in Dublin Port for over 50 years and now Dublin Port Co is helping their conservation by using pontoons to create environments for them to mate and rear their young. Video: Bryan O'Brien 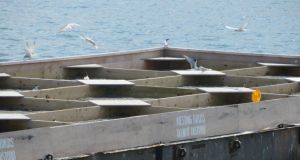 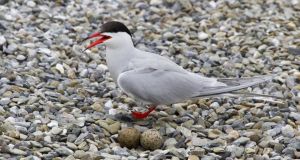 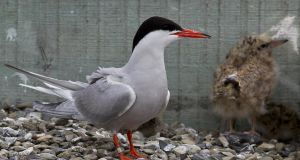 Strollers who enjoy the very popular South Wall walk out into Dublin Bay can already see a vivid example of the kind of imaginative “conflict resolution” between humans and nature that biospheres aim to promote, although it predates the recent designation.

A new pontoon has recently appeared off the wall, moored in the River Liffey. It’s entirely man-made, but it has already attracted two dozen nesting pairs of Arctic terns, which are delighting many walkers with their aerobatic displays as they fly in to feed their chicks.

Five species of tern – more elegant and agile versions of gulls – visit Ireland in summer. The very similar common and Arctic terns have both adapted flexibly in recent decades to the industrialisation of Dublin Bay.

On undisturbed coasts, terns nest in dense colonies on shingle beaches, hardly troubling to scrape a hollow between the pebbles for their well-camouflaged eggs. But as Dublin Bay developed in the 19th century, habitat loss and persecution drove them from the area.

In the 1950s, however, a tern colony re-established on a disused fuel dump in Ringsend, where their pristine whiteness contrasted strikingly with scatterings of black coal. And in the 1990s the late Oscar Merne, a talented and dedicated ornithologist with the National Parks and Wildlife Service, observed terns nesting on industrial marine platforms, known as dolphins, in the port.

Merne proposed two measures to help the colonies. Shingle was spread on the platforms, mimicking the unevenness of natural nesting sites, preventing eggs rolling around in high winds, and enhancing camouflage. A timber frame stops eggs and chicks from falling into the sea, and deters swimming predators – rats, stoats and foxes – from climbing on to them.

Fast-forward to Dublin Port Company’s current master plan for the area, and its commitment to “protection programmes for specific species”.

One of the “dolphins” used by the terns is now structurally unsound. The other is still used for unloading ships, which disturbs the birds, and is also slated for redevelopment. So, working with the environmental consultant Richard Nairn, the company decided to offer the terns alternative accommodation in the form of pontoons built for the Tall Ships visit, suitably refurbished.

The first was moored off Clontarf in 2013, and it quickly attracted 50 common-tern nests. The newer pontoon off the South Wall, appropriately named in honour of Oscar Merne, may become a permanent structure, secured with piles, if its location proves ideal.

But should we mourn the fact that terns are now nesting on artificial rather than natural sites within the bay? There is no denying that something fundamental has been lost here. Yet it is also true that the birds are demonstrating evolutionary adaptability and resilience by choosing this new habitat.

And the human response to this development, by conservation agencies and, especially, by a major industrial developer like Dublin Port Company, exemplifies the kind of innovative approach to sustainable development that the biosphere designation is meant to promote.

With luck it’s a sign of many things to come.