If the US can effectively ban coal-powered plants so can Ireland, say commentators 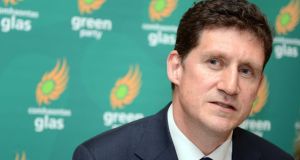 Green Party leader Eamon Ryan insisted Moneypoint could be shut down “tomorrow”, saying Ireland would “not have a moral leg to stand on” if it continued to burn coal for power generation in the wake of the US plan. Photograph: Eric Luke.

US president Barack Obama’s Clean Power Plan has been welcomed as “a good first step” by advocates for action on climate change in Ireland.

Mr Obama’s plan would cut carbon emissions in the power sector by 32 per cent by 2030, compared with 2005 levels.

However, the plan, which aims to cut greenhouse gas emissions from US power stations by nearly a third, has been described as a “war on coal”, with implications for Ireland’s use of the coal-burning Moneypoint power plant in Co Clare.

The plan effectively forces the replacement of coal-burning power plants with a more renewable form of energy.

According to commentators, such a move would put question marks over Ireland’s continued use of coal to fire Moneypoint .

Green Party leader Eamon Ryan insisted the plant could be shut down “tomorrow”, saying Ireland would “not have a moral leg to stand on” if it continued to burn coal for power generation in the wake of the US plan.

He added the State had sufficient gas, wind and other resources to provide power for the State’s needs without Moneypoint.

According to leading climate scientist John Sweeney, emeritus professor of geography at Maynooth University, the move by Mr Obama was “welcome” but he said it was the implementation of a deal already agreed between China and the US to reduce carbon emissions over the next 10 to 15 years.

“It is probably a radical step for the US but it is not as radical as Europe,” he said.

Climate change campaigners welcomed the US plan, with Joe Murray of the Irish global justice organisation Afri saying it was “a positive development”, even if it should have come sooner.

David Healy of Oxfam said the plan was “what the science has been saying”, but there was still an issue over how developing countries could skip the coal-burning stage and move to renewables.

Minister for Foreign Affairs Charlie Flanagan said the significance of the agreement was immense.

After months of negotiations, the 193 United Nations member states agreed on the new goals, to be adopted by world leaders at a summit in New York in September.

The agreement, reached late on Sunday night, marks the culmination of three years of efforts to create a new set of development goals to replace the Millennium Development Goals – eight targets introduced in 2000 which aimed to halve extreme poverty and hunger, achieve universal primary education and reduce child mortality.