North farmers hit by snow may get payments

NI executive to consider setting up fund on Thursday 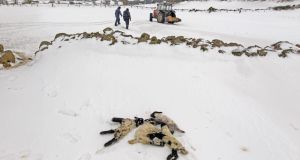 Farmers swamped by heavy snowfalls in the North this spring could receive hardship payments by the end of June, it was revealed.

Thousands of sheep and cattle died when some of the worst blizzards for years hit parts of counties Antrim and Down in March.

On Thursday Stormont’s ministerial Executive will consider creating a special fund for those who lost money and every effort will be made to process claims quickly, Stormont Agriculture and Rural Development Minister Michelle O’Neill said.

The money will be proportionate to loss, capped at €7,500 (£6,300) per farmer, and cover the cost of collection and disposal of fallen livestock.

Ms O’Neill told the Northern Ireland Assembly: “It is a fair scheme, it is aimed to get the money out quickly and mitigate against loss because some farmers’ losses were considerable.”

The minister said she intends farmers should receive payment by the end of June.

Most of the animals died in the Glens of Antrim and in the Mourne mountains in Co Down.

Many rural families were trapped in their homes after days of severe weather resulted in snow drifts reaching 5.5 metres in some areas.

Thousands of farm animals were stranded in snow-covered fields and some farmers could not reach them to provide food or shelter.