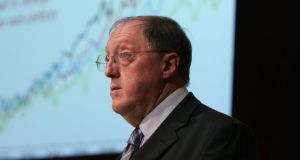 The Stop Climate Chaos coalition has criticised Minister for the Environment Phil Hogan for declining to meet them or to include any civil society representatives in the Irish delegation at the United Nations 19th climate conference in Warsaw – “Cop 19”.

It said the chief executives of Trócaire, Oxfam, Christian Aid and Friends of the Earth had requested a meeting with the Minister last month in advance of the conference.

Their request was turned down and the Department of the Environment declined to accredit civil society representatives – including Prof John Sweeney, one of Ireland’s leading experts on climate change.

“Refusing to accredit civil-society representatives overturns more than 15 years of custom and practice,” said Oisín Coghlan, director of Friends of the Earth Ireland.

‘Sudden’ policy change
“Prof Sweeney, for example, has attended three of the past four Cop events as part of the Government’s delegation, but suddenly we’re told the department’s policy is not to accredit non-governmental organisations (NGOs)”.

A spokesman for the department said: “The national delegation for such UN and intergovernmental conferences is drawn primarily from Government departments and agencies that are directly engaged on the policies and issues concerned and that work on the basis of an overall agreed national Government position, representing Ireland.”

He added: “Exceptions to this are not envisaged, save where some specific element of expertise is required to improve the overall national coverage of issues at the negotiations.”

He added that while former president Mary Robinson had been registered as a member of the Irish delegation in Warsaw her climate justice foundation was attending as an NGO.

Custom and practice
Mr Coghlan said it was “simply untrue” that NGO representatives were accredited only in exceptional circumstances, as this had been “custom and practice for at least 15 years”, or that it had only happened in the past when they were needed to fill an expertise gap.

Both Oxfam and Prof Sweeney had been “abruptly told the policy had changed and they wouldn’t be accredited”.