New Irish postcodes to be sent to 2.2m households in spring 2015 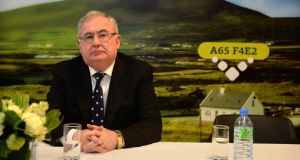 
Letters will be sent to 2.2 million households across the country next spring with details of their new postcodes, it was announced yesterday.

Capita Ireland is the company licensed to manage Ireland’s new postcode system, and its business development director Liam Duggan said there would be a unique seven-character code for each address.

An Post and Minister for Communications Pat Rabbitte said the new system would make postal deliveries faster and more efficient.

As details of the new postcodes were unveiled yesterday, Mr Rabbitte admitted the system would make it easier for Government agencies such as Revenue to collect charges.


Technical design
He said the Government had officially agreed the technical design of the new postcodes, called Eircode, and work with Government departments to encode addresses in their databases had begun.

When asked at yesterday’s launch in Dublin whether the Eircode would make it easier for money such as water charges and taxes to be collected, the Minister said it would be in “all our interest” that Government agencies could get accurate information quickly.

“I don’t recall the Revenue Commissioners ever failing to do their job because they couldn’t find the house,” he said.

“But the fact of the matter is of course it makes the delivery of State services more efficient.”

He said 35 per cent of houses in the State did not have a unique name or number, mainly in rural areas.

Mr Duggan said the code could be added to the end of the address and people did not need to change their address.

Mr Duggan said any address could be searched for on the Eircode website (eircode. ie) but no personal information would be revealed. He said codes would not be assigned to bedsits, caravans not in permanent locations, points of interest or boats.

An Post chief executive Donal Connell said it would work “very closely” with Eircode, the new company set up by Capita to manage the codes, in implementing the national infrastructure.

“It will certainly help with the efficiency of our distribution,” he said.

“There will be substantial savings from it in the future years,” he said.

When asked would the new programme result in a loss of jobs for An Post employees, Mr Connell replied: “No, I don’t think so.”