Nationwide ban on smoky coal due within the next year 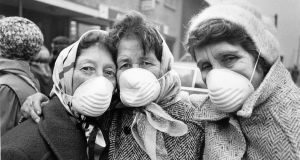 A file image from 1988 showing Pauline O’Hara (left), Mrs Bridget O’Hara (centre), and Mrs Mary Nolan who protective masks distributed yesterday by local GP, Dr Conor O’Hanlon, in a protest at Government inactivity over smog levels in Dublin. A smoky coal ban was introduced in the city in 1990. Photograph: The Irish Times

There will be a nationwide ban on smoky coal within the next year, Minister for the Environment Alan Kelly has said.

However, Mr Kelly said that Irish people would remain at risk from “cheap smoky coal” unless a similar ban was introduced in Northern Ireland.

The Minister said that implementing a national ban required consultation with the EU Commission, but that he wanted the prohibition to be in place by the start of next year’s “heating season”.

Mr Kelly said: “This is a historic day. I believe it is totally necessary the process is kicked off now so that 12 months from now this ban will be effective.”

Mr Kelly announced the initiative at a clean air conference organised to mark the 25th anniversary of the ban on the sale of smoky coal in Dublin.

The prohibition on bituminous or smoky coal was introduced in the capital in September 1990 after several years of severe winter smog resulting from the use of coal for home heating.

The ban, introduced by then minister of state for the environment Mary Harney, reduced significantly smoke and sulphur dioxide levels and improved public health, particularly for those with cardiac or respiratory conditions such as asthma.

It was extended to Cork city in 1995 and is currently in force in 26 urban areas, including all towns with a population greater than 15,000.

“In the region of 8,000 lives have been saved in Dublin since the introduction of the smoky coal ban in 1990 and further health and economic benefits estimated at €53 million per year will be realised when the ban is extended nationwide,” Mr Kelly said. 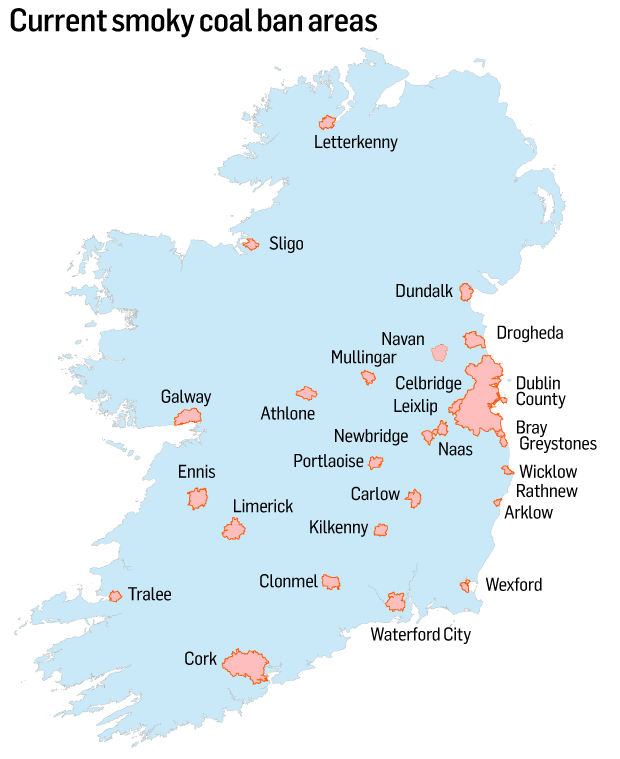 The Minister said that it was an unacceptable anomaly that air quality in some provincial towns during the winter is “vastly poorer” than in the cities and larger urban areas.

He cited recent research by University College Cork, which showed that air pollution levels in Killarney were ten times higher during the night than through the day.

“The original ban in Dublin has been cited widely as a successful policy intervention and has become something of an icon within the clean air community.

“Ireland also became the first country in the world to introduce a nationwide smoking ban 10 years ago and I want us to now show similar leadership in relation to clean air policy,” Mr Kelly said.

Mr Kelly said an all-island smoky coal ban was needed for the policy to be effective.

“Obviously we have an issue in relation to cheap smoky coal coming in from the North down into the country.”

A North-South study, yet to be published, indicated support for an outright nationwide ban on smoky coal, Mr Kelly said.

“We will be working as part of this process with our Northern colleagues. I will be encouraging them to be aligned with ourselves on this issue . . . I would like Northern Ireland to do it as well in a similar timeframe.”

Director general of the Environmental Protection Agency Laura Burke said the Dublin ban had been a “groundbreaking piece of legislation” and it was now time to build on its success.

The agency’s 2014 air quality report showed that Ireland did not exceed any legal EU limit values in 2014 and that air quality was “currently good, relative to other EU member states”.

However, Ms Burke said that “people’s fuel choices can directly impact on air quality and on our health, particularly in our small towns and villages”.

The Asthma Society of Ireland said it was “delighted” with the ban.

“The risk smoky coal poses to our health has now been recognised and tackled at source following years of campaigning.

“It is estimated that nearly 2,000 lives are lost on the island of Ireland each year from smoky coal pollution and today the right to clean air has been acknowledged,” society chief executive Sharon Cosgrove said.