EU urged to introduce goals for countries after 2020, in conflict with commission view 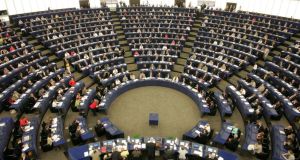 The European Parliament, meeting this week in Strasbourg, has called on the European Union to introduce mandatory targets on renewable energy for individual countries after 2020. Photograph: Jean-Marc Loos/Reuters.

The European Parliament has called on the European Union to introduce mandatory targets on renewable energy for individual countries after 2020, putting it in direct conflict with a European Commission proposal unveiled two weeks ago.

MEPs in Strasbourg voted by 341 votes to 263 in favour of the proposal today in Strasbourg, while 26 abstained.

While the vote is not binding, it indicates the level of opposition to the European Commission’s plan to remove mandatory renewable energy targets for each member state.

Last month the European Commission - the only EU institution that can initiate legislation - unveiled its climate change proposal for 2030 that will replace the current EU framework on climate change which runs until 2020.

While the proposal suggests a 40 per cent reduction in carbon emissions by 2030 and a target for 27 per cent of all EU energy to come from renewables, it does not contain specific targets for member states on renewable energy.

The current legislation that governs EU energy policy until 2020 requires 20 per cent of all energy to be derived from renewable by the end of the decade, with each country obliged to adhere to strict, binding targets.

In a resolution backed by MEPs today, the European Parliament called on the European Commission and member states to set a binding target of at least 30 per cent for renewables, and to include specific national targets for member states, “taking into account the individual situation and potential of each member state.

It also called for the binding 40 per cent reduction in carbon emissions to be implemented by means of individual national targets.

The Government has insisted that its policy on renewable energy will not be affected by new EU legislation on energy.

Ireland must still reach specific renewable energy targets by 2020, and has already been referred to the European Court of Justice for failing to transpose all parts of the relevant directive into National law.

The Sustainable Energy Authority of Ireland has also pointed out that renewable energy will still be the main way Ireland will be able to meet the carbon emissions reduction target of 40 per cent, post 2030.

Unlike other European countries, Ireland is not in a position to meet its emissions targets through nuclear energy or shale.

However, there are concerns that any decision to remove binding national targets on renewable after 2020 could impact Britain’s willingness to import Irish wind energy as set out in a memorandum of understanding signed by the Irish and British governments last year.

The European Commission’s paper published last month is only the first stage in the legislative process. Leaders of EU member states, including Taoiseach Enda Kenny, will discuss the issue for the first time at a summit of EU leaders in Brussels in March.