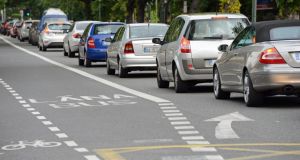 Burning of solid fuel and and emissions from car exhausts are the main sources of poor air quality, the report says. Photograph: Eric Luke/the Irish Times

Ireland enjoys good air quality compared with other European countries but meeting proposed new standards could be a challenge, according to a report published today.

The report notes the World Health Organisation (WHO) has developed guideline standards for air quality which are tighter than current EU standards. If these are adopted by the EU, Ireland will face a challenge in meeting the new standards because Irish levels of particulate matter currently exceed WHO air quality guidelines , the report says.

In general the report is positive. “Overall, relative to other EU member states, Ireland continues to enjoy good air quality, with no exceedances for the pollutants measured in 2012. This is due largely to the prevailing clean westerly air-flow from the Atlantic, a small number of large cities and an industrial sector which is relatively clean and well regulated,” the report says.

But director general of the EPA Laura Burke warned that changes would have to be made to maintain good air quality. “While people have been enduring so much hardship in recent years, one small consolation has always been that at least we live in a country where the environment is in good shape and the air is clean. Unless we make changes, we cannot continue to rely on that,” she said.

The report says to ensure good air quality, Ireland must continue to enforce the ban on bituminous, or ‘smoky’, coal. It goes on to say households and businesses should look to more efficient methods of burning fuel and also move from solid fuels to cleaner alternatives.

Burning of solid fuel and emissions from car exhausts remain the main sources of poor air quality in Ireland. The EPA said Ireland needed to reduce traffic emissions by implementing policies to reduce travel demand and to increase the use of alternatives to the private car such as cycling, walking, and public transport and improve the efficiencies of motorised transport.

Air pollution can negatively affect human health and wildlife ecosystems. The report says Ireland has seen a significant improvement in its ambient air quality since the introduction of a number of EU-driven legislative measures since the early 1990s.

Under current EU legislation, Ireland is required to reduce exposure to fine particulate matter (PM2.5) by 10 per cent between 2012 and 2020.