Medical professionals to call for permanent ban on fracking 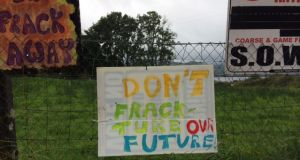 Protest against fracking in Fermanagh in 2014. Oil and gas company Tamboran has expressed an interest in fracking in a cross-border area between south Fermanagh and north Leitrim.

A group of medical professionals led by a former president of the Irish Medical Organisation is to call for a ban of fracking in Ireland.

Concerned Health Professionals Ireland (CHPI), which will be launched on Wednesday, involves more than a dozen health practitioners who believe there is overwhelming evidence that fracking is bad for human health.

She maintained rashes, sore ears and runny noses have been proven to have been caused by fracking along with respiratory illnesses in children with asthma as a result of the release of hydrogen sulfide.

“Aside from other pollutants, we know that benzene in the water will cause leukaemia,” she said.

She said there are now 500 peer-reviewed studies that suggest a link between the gas extraction process and poor human health.

Fracking involves the process of extracting natural gas from the ground using hydraulic fracturing. The combination of sand and high pressure water shatters the rocks and releases the natural gas.

Supporters of the process which is widespread in the United States say it is safe when carried out properly, but opponents say there is a large body of medical evidence to suggest the process is dangerous.

Oil and gas company Tamboran has expressed an interest in fracking in a cross-border area between south Fermanagh and north Leitrim, but it is currently not allowed in Ireland.

The process is now the subject of an independent study by the Environmental Protection Agency (EPA).

Dr Gilvarry said the aim of the CHPI is to secure a permanent ban on fracking both North and South.

She said medical professionals in New York state were successful in persuading the governor of the state Andrew Cuomo to ban the practice.

“We are gradually getting the support of our colleagues. There is a groundswell happening. The evidence is there,” she said.

“Fracking causes water and air pollution. We are not confident that the EPA study will show the medical affects of fracking.”