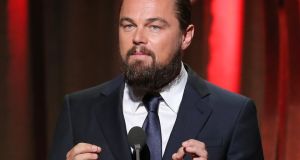 Actor/activist Leonardo DiCaprio: “None of this is rhetoric and none of it is hysteria. It is fact.” Photograph: Jemal Countess/Getty Images

A young mother from the Marshall Islands, which could be threatened with extinction by rising sea levels, stole the show at yesterday’s opening session of the UN climate summit in New York by reciting a poem she had written for her baby daughter.

Chosen by the UN to represent civil society, poet Kathy Jetnil-Kijiner (26) said: “We deserve to do more than just survive. We deserve to thrive.”

She promised her seven-month-old daughter Matafele Peinam, who was presented from the podium: “We won’t let you drown.”

Her powerful contribution, which won a standing ovation from delegates, castigated those who ignore the people whose lives and livelihoods are threatened by global warming, while celebrating those fighting for change through grassroot action and civil disobedience.

“No backwater bullying of businesses with broken morals, no blindfolded bureaucracies gonna push this mother ocean over the edge, no one’s drowning, baby, no one’s moving, no one’s losing their homeland,” the Marshall islander said defiantly.

Earlier, actor Leonardo DiCaprio, now a United Nations messenger of peace, got another standing ovation when he told the assembled world leaders and diplomats that his job was to “pretend for a living” by playing “fictitious characters often solving fictitious problems”.

But there was nothing fictitious about the evidence for climate change. “None of this is rhetoric and none of it is hysteria. It is fact. The scientific community knows it, industry and governments know it, even the United States military knows it,” the Hollywood star said.

“I am not a scientist, but I don’t need to be, because the world’s scientific community has spoken and they have given us our prognosis. If we do not act together, we will surely perish. Now is our moment for action.”