Move would be coup for Minister for Agriculture Simon Coveney 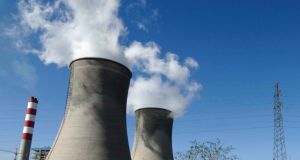 The EU looks set to create a loophole in its climate laws that would allow Ireland to offset its growing greenhouse gas emissions from agriculture by planting forests.

The draft concession, if approved by other member states, would represent a coup for agriculture minister Simon Coveney and Irish diplomats in Brussels, who have been lobbying hard for Ireland’s climate obligation in the farming sector to be eased.

A leaked draft agreement for approval at a European Council meeting in October states that “countries with exceptionally high emissions in the agriculture sector - i.e. over 40 per cent - should be allowed to offset these emissions with the reductions from afforestation”.

EU leaders will set climate, renewable energy and energy efficiency targets for the period 2020-30 at the October meeting. They must also agree on which member states should take on the most stringent emissions reduction targets.

Environmental policy experts in Brussels say these figures may change as the negotiations enter their final weeks. But experts are divided on whether the draft’s many concessions to individual member states, including Ireland, can be removed as the deadline for reaching a consensus nears.

“Ireland has been lobbying on agriculture for a very long time so it will be very difficult to get this [afforestation clause] out of the agreement,” one Brussels environmental campaigner said. But a second source said other member states will question Ireland’s special treatment.

The reference to agricultural emissions of “over 40 per cent” means the loophole may apply only to Ireland, experts say.

A spokeswoman for Mr Coveney said Ireland has one of the word’s most efficient agricultural systems in terms of carbon intensity. The Government wants the EU to take a “realistic and coherent” approach that will take account of both agriculture and forestry and will encourage “climate-resilient” farming, she said.

Ireland will fail to meet its current emissions reduction target for 2020 because of agriculture’s growing climate impact, the Environmental Protection Agency has warned. This puts the country at risk of financial penalties.

Ireland currently has the strictest emissions reduction target for non-industrial sectors. Current targets were set based on GDP per capita in 2008, putting Ireland, along with Denmark and Luxembourg, at the top of the table with an obligation to cut emissions by 20 per cent on 2005 levels.

Green NGOs oppose allowing greenhouse gas emissions to be offset using forests, arguing that while emissions are permanent, trees can only sequester CO2 until they are cut down.