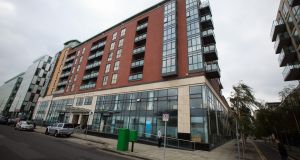 Dublin Fire Brigade has issued a fire safety notice giving residents of the 299 apartments built in 2006 by developer Bernard McNamara, one month to start fixing the defects in the complex.

The remedial work includes the installation of “an adequate smoke ventilation system” for the lobbies and communal stairs, fire separation between apartments, upgrading of fire doors and the installation of fire stopping material in utility services. Failure to comply with the fire notice could result in evacuation of the building.

The meeting with Ms Ní Dhálaigh will be followed by a city council meeting on Monday night where the issue will be discussed. Residents also hope to meet Minister for the Environment Alan Kelly on Tuesday.

Speaking on RTÉ’s The Week in Politics, Mr Kelly said he expects other developments will be found to have fire safety defects similar to those discovered at Longboat Quay.

“This isn’t the only site that will have issues, there will be more coming down the road. I expect that, because of the level of regulation that was there in the past and the standards that were maintained.”

However, he said new building standards regulations were designed to guard against shoddy practices in the future.

“We have ramped up the inspection process to ensure that into the future when construction is ongoing that this can never happen again.”

Residents last Friday rejected an offer from the Dublin Docklands Development Authority (DDDA) and Nama of €1.5 million-€1.75 million towards the cost of fixing fire defects in the complex as “wholly unacceptable” and insufficient to allow work to begin.

The authority said it had already invested more than €1 million in the installation of fire alarms and the contracting of fire wardens and that the total offer, including the money made available through Nama, amounted to €2.75 million.

This, it said, would leave residents with a bill of about €2 million.

The Longboat Quay Management Company, which is controlled by the residents, said the figures were inaccurate and only €750,000 had so far been offered.