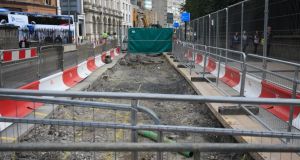 Dublin is once again becoming a dirty old town with its city centre slipping down the rankings of the Irish Business Against Litter (Ibal) national litter survey.

Visitors to the capital this summer encountered more litter than in previous years with high footfall areas such as Grafton Street and O’Connell Street slipping from clean to “moderately littered”, according to the survey carried out by An Taisce for the anti-litter business organisation.

There was better news for the north inner city. Previously a litter blackspot, the area has improved and now sits at number 37 of 40 areas surveyed. Conor Horgan, Ibal spokesman, said: “The most striking aspect of this survey is the improvement in neglected urban areas such as Dublin’s north inner city.”

Mr Hogan credits recent efforts by Dublin City Council to clean up the area. The council last September announced a crackdown on illegal dumping. Last week it said more than half of households targeted have now signed up to pay their waste charges.

Killarney was the cleanest town surveyed, followed by Dungarvan and Tralee. An Taisce praised Killarney’s win as “a fitting result for a town which is at the heart of our tourism product”.

“It is the continuous attention to detail which puts Killarney at the top of the league.”