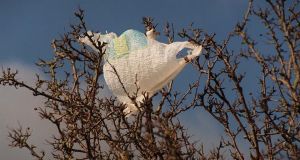 Minister for the Environment Mark Durkan said: “Our streets and hedgerows, our fields and parks should no longer be places strewn with discarded bags. In many ways the public are ahead of government here, showing a great appetite for this legislation to be introduced.” Photograph: Frank Miller/The Irish Times

Plastic carrier bag use in major stores in Northern Ireland has reduced by possibly 80 per cent since the introduction of an environmental levy, new figures indicate.

Three months on since customers began to be charged 5p per bag, provisional data suggests a dramatic impact.

There were an estimated 17.5 million bags used from April through to the end of June — with several major supermarket chains reporting an 80 per cent drop in bag usage.

Last year, over the 12 months, about 300 million bag were used in Northern Ireland.

While seasonal variations need to be factored in, such as the pre-Christmas shopping surge, the figures for the first three months of the Stormont Executive levy indicate it has had the desired effect.

The measure was introduced by then minister for the environment, Alex Attwood. His successor, Mark Durkan, has welcomed the provisional findings.

“This is great news for the environment,” he said.

“Our streets and hedgerows, our fields and parks should no longer be places strewn with discarded bags. In many ways the public are ahead of government here, showing a great appetite for this legislation to be introduced.

“I commend people for their responsible attitude and willingness to come on board. They are making a personal contribution to addressing the threat of climate change and environmental damage. I very much urge them to keep up the momentum - keep reusing bags.”

The Minister added: “Retailers have played a big part in introducing the legislation as smoothly as possible. I congratulate them on that.”