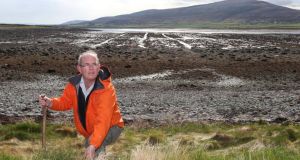 The network along some 30km of coastline suggests a thriving inshore economy over some 7,000 years in the area.

The seaweed farm at Aughinish island, below the Burren on the Galway-Clare border, is the largest and best preserved of its kind on the entire coastline, according to archaeologist Michael Gibbons.

He said the long parallel banks of stone placed on the foreshore to encourage plants to grow indicated that Ireland might have been as advanced then as Asian countries such as Japan and China were now in seaweed cultivation. Each parallel bank is separated by cart tracks, with the cultivated weed crop grown in beds.

The crop was less contested within the community than the seaweed blown in by the wind along the strand, which was known as “bualadhisteach”.

Mr Gibbons said similar beds once existed in Achill Sound, Co Mayo, and at Mill Bay in Co Down, but these were not nearly so well preserved.

He believes the Aughinish beds to be of national importance, and warned they were “extremely vulnerable”.

“The beds were used from late medieval times, right up to the 1950s,” Mr Gibbons said. Coincidentally, they lie across the bay from the State’s national research centre, the Marine Institute at Oranmore.

Stone Age sites
A combination of field survey work and analysis of satellite imagery has also helped to identify a complex of oyster middens, cairns and quays along the same shoreline between Ballyvaughan and Kinvara.

Some sites may date back to Mesolithic times, when Clare and Connemara were first settled. Middens on the north Connemara coast have been dated to 4,500 BC, and have yielded stone-axe finds.