Thousands of trees brought down 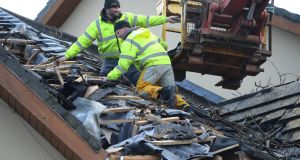 Workers clean up after the storm that knocked a tree on top of a bar in Tralee. Photograph: Domnick Walsh


described as “the worst storm in living memory”.

Snow and ice slowed things in the morning and the county council sent snow ploughs to west and north Kerry.

The main road between Killorglin and Killarney was badly iced over for much of the day, and gritting was under way there and in other parts.

Thousands of trees brought down in Wednesday’s storm were being cleared. Some public parks, such as Ballyseedy Wood in Tralee, were closed to the public after several trees fell along paths.

Killarney National Park was urging the public to stay away for their safety.

Dozens of schools were closed, including Listellick national school where children sheltered under benches as the roof of their prefab class room lifted over their heads. Principal Annette Dineen called for a new school.

The Aquadome water park in Tralee was closed because of damage, as was the Brandon Hotel in Tralee.

Trees were being cleaned in Listowel, where the top of the Millennium Arch was blown off.

The damage to power lines in north Kerry was caused by items such as garden trampolines hitting wires, an ESB spokesman said.

New ESB poles put in just two years ago near Tarbert were “lifted clean out of the ground” in the storm, the spokesman said.

Thankful that no one had lost their life, county council spokesman Padraig Corkery said “nobody remembers a storm like that.”

Last night it issued a warning regarding high tides in the city today and warned Morrisson’s Island, parts of the South Mall, South Terrace, Wandesford Quay and French’s Quay are facing flooding between 5pm and 6pm.

“Road and street closures will be put in place in the city centre from 4.30pm until 6.30pm and parking and access will be restricted during the period,” it said.