We're getting a break from the rain as temperatures are set to hit 28C on Tuesday in parts of the country making it the hottest day of the year so far. Inland areas will experience the warmest weather. Video: Bryan O'Brien 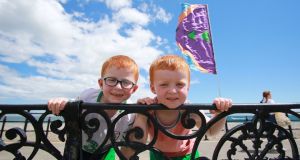 Met Éireann may have issued a high temperature warning for the first time in three years but fear not for your window boxes, rain is on the way.

Ireland is basking in warm sunshine onTuesday but Met Éireann is forecasting widespread rain on Thursday. “Thursday will start off dry with bright or sunny spells. However rain will develop in the west during the morning and will spread across the country through the afternoon,” the forecaster said.

It said the rain would continue for the rest of Thursday and would only clear slowly overnight. Temperatures will fall back to the low 20s Celsius on Wednesday and even further on Thursday.

A yellow weather warning, the lowest level, is issued if temperatures go above 27 degrees and is in place until 8pm.

Tuesday is expected to be the hottest day of the year to date with temperatures soaring to 28 degrees in parts of the midlands and western areas.

The last time a high temperature warning was given was in 2013, according to Met Éireann spokesman Hugh Daly. 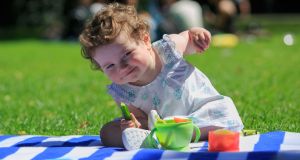 I'm tweeting this as in 14 years I've never seen a 30 on a chart. We're going to 28 tomorrow. @MetEireann #weather pic.twitter.com/ASlCCVs8Yw

He describes it as a “gentle alert” for people who may be affected by high temperatures.

On Monday temperatures hit 27 degrees in the Phoenix Park at both 2 pm and 3 pm and Mount Dillon, Roscommon where it hit 27.3 degrees at 2 pm.

The Phoenix Park is not seen as a general indicator of temperatures as it “tends to be a bit higher there because it’s very sheltered”, Mr Daly said.

Dublin Airport hit 25 degrees on Monday as did Casement aerodrome.

On Tuesday it will be slightly cooler along coastal areas with lingering sea fog and highs of 20-23 degrees. It will be sunny and very warm for most of the country although cloud will increase during the day.

A few showers may develop in northwestern areas on Tuesday evening, with some possibly heavy or thundery. Winds will remain light easterly or southeasterly and most parts of the country will stay dry.

Mount Dillon reflected the expectation that the hottest weather would be in the midlands.

The mild weather means it could become dull and cloudy on some coastal fringes in the south and the east with sea fog drifting inland. There was a slight risk of showers in north Leinster and Ulster later on Monday.

While most people will be rushing outdoors this week to enjoy the heat wave, nearly 20 per cent of the Irish population will be forced to hide away from the warm air as they cough and splutter their way through the high levels of pollen being experienced this summer.

The combination of a very wet winter followed by balmy weather in the spring has led to an explosion of grass pollen with many people suffering from runny noses and never-ending sneezing attacks.