Declines of 35% in cereal crops across Africa expected by mid-century, says Oxfam 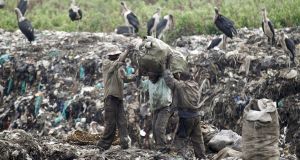 The Irish State has pledged nearly €2 million to fight climate change in some of the world’s poorest countries to mark United Nations World Environment Day.

Minister for Foreign Affairs and Trade Charlie Flanagan announced that the €2 million would be donated to a number of international environment groups, including the Mary Robinson Foundation – Climate Justice which will work to promote the participation of women in global climate negotiations.

An international agreement on climate change, aimed at reducing greenhouse gas emissions, is set to be ratified in Paris in December this year.

“2015 is a pivotal year in human history as the international community works to achieve a global political consensus on sustainable development and climate change,” said Mr Flanagan.

He said the Republic was dedicated to playing its role in addressing climate change which includes an EU commitment to reduce emissions by 40 per cent by 2030.

A study released by Oxfam warned that coal has become the biggest driver to climate change, with coal plants in the G7 nations set to cost the world $450 billion (€405 billion) by the end of this century.

Africa’s food production systems are highly vulnerable to climate change with declines of up to 35 per cent in cereal crops across the continent expect by mid-century, Oxfam said.

“The G7 leaders must stop using emissions growth in developing countries as an excuse for inaction and begin leading the world away from fossil fuels by starting with their own addiction to coal,” said Oxfam chief executive Jim Clarken.