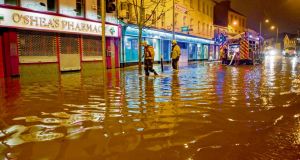 Emergencey services dealing with floods in Blackpool, Cork, this year

Ireland will become a balmier place as a result of climate change but the summertime benefits will come at a cost. The warmer, drier summers will be followed by wetter autumns and winters with floods an almost certainty, according to new climate research released last night.

International effort
Met Éireann co-ordinated a major international study looking specifically at how climate change would alter the picture here. It draws on its own data sets collected over decades but also on expertise available from Ireland and abroad.

The results were used to deliver a detailed report, Irish Climate: The Road Ahead. It provides assessments of changes to mean air temperatures, wind and wave heights, but also the likely impact on river systems and the risk of flooding.

The generally warmer climate will provide some benefits, the authors say. For example, it should help to reduce the health burden, particularly amongst the elderly, which sees numbers entering hospitals over the winter months soar.

It should also mean less expenditure on wintertime heating, the authors add.

But this warm air carries a price. Warm air summer or winter holds more moisture and this will fall as precipitation, mainly rain. While summers will typically be up to 20 per cent drier compared to today’s normal, winters will see 14 per cent more precipitation.

The net result is more water filling the main river systems that, when overloaded, will trigger widespread flooding. Add to this an increased risk of exceptionally heavy downpours, and the chance of flooding soars.

The report also considers Ireland in a wider context, looking, for example, at effects on the north Atlantic region. It suggests that warming will increase in this region as air pollution gradually falls due to limits set by international treaty. Cleaner air means more energy reaching the surface from the sun and more heat trapped due to the greenhouse effect.

Ironically Ireland in this context may actually see wintertime periods when we do not benefit from warmer air but suffer through severe cold snaps such as those seen in 2010 and 2011. This the authors say will be caused by a greatly reduced ice cover over the Arctic, something that will allow polar air occasionally to break free and move southwards.

The study was timed to come out just before the latest international results from the Intergovernmental Panel on Climate Change (IPCC). Its fifth and probably final Assessment Report will be published in Stockholm tomorrow and will provide a global picture of climate change based on thousands of research studies from all around the world. Irish scientists contributed their research to the IPCC report as well.