Investing in the future: the institutions funding renewable energy projects 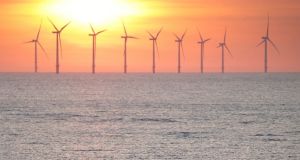 The sun sets behind an offshore wind farm. Photograph: Reuters

Given the sums involved, if there is one certainty about the opportunities of a country’s shift toward renewable energy, it is that investors will never be far behind.

Regulatory confidence is a must in attracting streams of capital looking for a home, but in an era where economic, consumer and legal demands make a rise in energy investment inevitable, then the money will not be difficult to come by. The questions are only whose investment, and where?

“What attracts us to the space is there is a major societal need,” says Dr Colin Hunt, AIB’s managing director of wholesale and institutional banking, arguably wrapping the entire investment pitch into one hard-to-argue-with sentence. But, as he also says: “We have got a huge challenge ahead of us in relation to the EU [renewable energy] targets for 2020 and then an even more onerous set which we are about to be handed for 2030.”

AIB’s stake in renewable investment is on the rise; this year alone it has provided finance for six onshore wind farms and harbours ambitions to extend its interests into offshore, solar and energy storage. It is an example of the kind of formidable institutional investor lying in wait.

In his Ballsbridge office, Dr Hunt overlooks sweeping views of Dublin. In the distance are the city’s epochal Pigeon House chimneys, a suitable reminder of the type of outmoded energy his office is fighting with a corporate investment strategy turning an ever-deepening shade of green. Outside the glass office doors are AIB’s recently assembled renewable assets development team – the “largest in the Irish market” with just over 10 members – focused on an investment environment that, if not quite new, has a long way to go. Now, says Dr Hunt, is the time.

“There is very rarely you see an opportunity quite like this one where there is a complete alignment of the needs of the economy, of the needs of society, and of the desire for investors of stable long-term returns. We have that now in renewable energy,” he says.

When was the last time a comparable era of “alignment” emerged in infrastructure investment? Roads to accommodate the internal combustion engine? Railway lines to facilitate the mass-scale movement of goods, carving open entire continents?

“Trains are interesting because there was a pressing societal and economic need for trains, but not quite as pressing as this,” Dr Hunt says.

“It was largely economic in nature whereas this one is about protecting and preserving our environment for future generations. Trains, of course, were a fantastic investment until they weren’t.”

That is a key point – sustainable energy and technologies that reduce carbon emissions are unlikely to fade away into the annals of spent investment space. In financial circles, Dr Hunt explains, there is already a general consensus on short-term numbers – Ireland’s renewable energy targets will require about €10 billion to finance infrastructural needs. That capital will be available from private funds, but regulatory certainty is urgently needed to bolster confidence.

The Department of Communications, Climate Action and Environment is currently working out the Renewable Electricity Support Scheme (RESS) and has sought submissions from stakeholders. It is aimed at supporting “models and pathways” for an ever greater level of renewable electricity projects.

“That [transformation] is a huge challenge for the country but it is also a huge opportunity for financial institutions,” says Dr Hunt.

We have a mountain to climb as a country and the sooner we get that very, very clear policy outline the better

“Given the bounteous nature of the wind that comes across the Atlantic and hits us, there is ample room for renewable energy to play an even greater role in terms of total electricity consumption in the State.”

As well as banks, there are private investment funds, pension funds, foreign investors and of course the State, all of whom will play different roles in the slow, persistent manifestation of turbines and solar panels across the island.

The timing is urgent. Ireland’s performance has not been inspiring (a recent report by Climate Action Network Europe found we are on our way to missing 2020 renewable targets) and while Taoiseach Leo Varadkar has spoken about the country becoming a leader in climate action, private investors are keen to see that solid regulatory backbone.

“We have a mountain to climb as a country and the sooner we get that very, very clear policy outline the better,” says Dr Hunt.

“We should never, ever underestimate the importance to financial markets and to banking in general . . . of policy certainty. And at the moment we have a degree of uncertainty about what is going to come.”

To date, most funding has been in the direction of onshore wind energy but the number and ease of technologies are growing, and institutional willingness along with them. Projects and assets, are particularly appealing when they reach the viability stage although there are also those willing to put money into green-field ambitions and assume development risks, unsurprisingly for greater pay-offs.

“Once it’s generating electricity, once the turbines are turning, once the wind is blowing, it’s a really attractive asset,” Dr Hunt says. “The risks go higher the further back you go from that point. You have got construction risks before that, you have got planning risks before that, and the earlier you go in the development cycle, the greater the returns that will be required by people who are willing to deploy capital.”

When assets become operational they can be sold to long-term interests such as pension funds. Dr Hunt predicts an investment evolution too; as well as the type of traditional infrastructure funds already active here, there could be varying models of joint ventures “involving many, many providers of capital participating at many stages of the development cycle”.

Ireland’s island geography is advantageous for wind and, despite common jokes about a wanting climate, he insists solar too should never be dismissed. Energy storage, such as battery technology, should also give rise to further investment opportunities, he says.