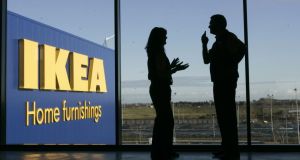 Ikea in Ballymun, Dublin. Planning consultant for Ikea Tom Phillips said the company was willing to make a “multimillion investment” in the area, and had been speaking to Dún Laoghaire-Rathdown County Council about it for “three years and a month”. Photograph: Dara Mac Dónaill

Speaking at an oral hearing for the Cherrywood SDZ, Tom Phillips, planning consultant for Ikea, said the company was willing to make a “multimillion investment” in the area, and had been speaking to Dún Laoghaire-Rathdown County Council about it for “three years and a month”.

His client was “incredulous” that a study examining areas suitable for large retail warehousing had not yet been completed by the local authority, which is also the development agency for the site.

Also representing seven landowners at Cherrywood, Mr Phillips said the scheme was “unworkable” because of its inflexibility and phasing of development.

The council is seeking approval for a town centre and three village centres as part of a 264-hectare SDZ at Cherrywood. The site is bound by the M50 to the west, the N11 to the east and is served by the Cherrywood Luas. If SDZ status is approved, developments assessed by the council as being in compliance with the plan will not be open to appeal to An Bord Pleanála.

Senior planner with the council Mary Henchy said no council was going to reject the benefit of bringing a large employer such as Ikea to the county, but the study had to be completed. If it found Cherrywood was suitable for large-scale warehousing, the SDZ could be varied later by councillors to allow for it.

Representing landowner William Neville and Sons, which owns more than 50 hectares in the Cherrywood area, planning consultant Simon Clear raised concerns about part of his client’s lands being designated for Traveller accommodation.

He said the land in question was to be zoned for high density yet in practice Traveller accommodation was single storey and dispersed. If such accommodation was developed in this area it would “destroy” the residential development potential of the site.

1 Production at Brady’s Ham plant in Kildare stops after 80 staff test positive for Covid-19
2 How a ship abandoned by its owner brought deadly cargo to Beirut
3 Officials refuse to rule out ‘Midlands lockdown’ following Covid-19 surge
4 Masks Q&A: Who has to wear them in shops and what happens if you don’t?
5 Well-known figures in Irish soccer arrested over €3m heroin haul
Real news has value SUBSCRIBE