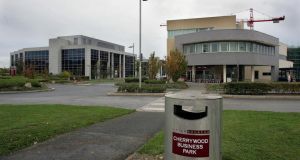 Swedish furniture giant Ikea and controversial development company Jackson Way Properties have asked An Bord Pleanála to vary plans for a major new town and village development at the southern end of the M50.

Dún Laoghaire-Rathdown County Council is seeking approval for a new town centre and three village centres as part of a 264-hectares strategic development zone at Cherrywood.

The site is bounded by the M50 to the west, the N11 to the east and is served by the Cherrywood Luas.

The plan is supported by the National Roads Authority on the basis that increased private car usage of the already congested M50-M11 junction would be discouraged. A spokesman said it was envisaged that development would be phased in in tandem with assessments of the traffic impact and a new bus service linking to north Wicklow.

However in its submission to the board, Ikea has asked that retail limits be raised to allow a 35,000 square metre store with 1,500 car parking spaces.

Jackson Way Properties, which was at the centre of allegations of corruption in the planning process at the Mahon tribunal, has asked the board to recognise and take account of its plans for a bridge over the M50 to serve its housing lands west of the M50 motorway.

In addition to Ikea and Jackson Way, those listed as appellants include south Dublin and Wicklow county councils and Bray Town Council. Individual retailers and trade associations opposed to all or some aspects of the proposals also come from these areas, as well as Dún Laoghaire town centre. Retailer concerns centre on a commercial “drain” to the new town and village centres.

Other appellants include Cabinteely and District Residents Association; DLR Properties Limited, Nama; a range of privately owned property companies, private landowners and others.

Appellants also include Greystones town and Wicklow county councillor Derek Mitchell, who has campaigned for improvements to a 4km stretch of road, including the M50-M11 junction, which was left out of recent M50 junction upgrades.

Mr Mitchell told the planning inquiry that traffic tailed back from Kilmacanogue and Kilcroney in north Co Wicklow to the Cherrywood junction each weekday. He said he was concerned “that the M11-M50 will seize up” even “before this development is built”.

Mr Mitchell told The Irish Times he found it difficult to see how the National Roads Authority could have sent a letter of support for the development to Bord Pleanála when the roads authority was in possession of a 2010 report which found the existing road access to be “not suited to cater for the current volume of traffic” .