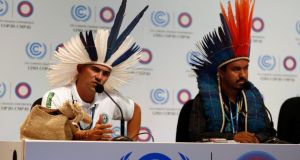 Marcos Avilques and Marcio Kokoj of the Co-ordination of the Indigenous Organisations of the Brazilian Amazon address a news conference as part of the UN climate change conference in Lima. Photograph: Mariana Bazo/Reuters

Climate change adaptation costs for developing countries are likely to be double or even treble current estimates of $70 billion-$100 billion (€57 billion-€81 billion) per year, according to a new report by the UN Environment Programme (Unep).

Released at the UN climate conference in Lima, where delegates have finally entered into negotiation mode, the report says the higher estimates would apply even if greenhouse gas emissions are cut to cap global warming at 2 degrees Celsius.

Unep’s first Adaptation Gap Report warns that, although funding for adaptation to the impacts of climate change reached $23 billion-$26 billion (€19 billion-€21 billion) in 2012-2013, “there will be a significant funding gap after 2020 unless new and additional finance is made available”.

It says: “Without further action on cutting emissions, as outlined in Unep’s Emissions Gap Report 2014, the cost of adaptation will soar even further as wider and more expensive action is needed to protect communities from the intensifying impacts.”

Unep executive director Achim Steiner told a press briefing in Lima that the delegates from 194 countries needed to include “comprehensive adaptation plans” in the global agreement on climate change, due to be concluded in Paris at the end of 2015.

“The impacts of climate change are already beginning to be factored into the budgets of national and local authorities. The escalating cost implications on communities, cities, business, taxpayers and national budgets merit closer attention,” he said.

“Of particular concern are the implications for the least developed countries, whose financial resources for investing in development will need to be redeployed to financing adaptation measures,” Mr Steiner said, adding that rich countries would have to help.

“The report provides a powerful reminder that the potential cost of inaction carries a real price tag. Debating the economics of our response to climate change must become more honest. We owe it to ourselves but also to the next generation, as it is they who will have to foot the bill.”

It was the recent Fifth Assessment Report by the Intergovernmental Panel on Climate Change that included estimates on the cost of adaptation in developing countries of $70-$100 billion per year by 2050 – based largely on World Bank figures from 2010.

But Unep’s Adaptation Gap Report, produced in collaboration with 19 leading institutions and research centres, included new national and sector studies in its analysis and concludes that the earlier figures are “likely to be a significant underestimate”.

An earlier Unep report, released prior to last year’s Warsaw climate conference, found that adaptation costs for Africa alone could reach $350 billion annually by 2070 if the 2 degrees Celsius target is significantly exceeded, compared to $150 billion lower per year if it was achieved.

The latest report also highlights that least-developed countries and low-lying small island states are “likely to have far greater adaptation needs”; without early efforts, the adaptation gap “will widen as greater financial resources will need to be committed later on”.

Meanwhile, the climate talks in Lima have moved into a higher gear as co-chairs Artur Runge-Metzger and Kishan Kumarsingh yielded to pressure from developing countries for “party-driven” negotiations to begin on elements of text for next year’s agreement in Paris.

But developed countries made it clear that they do not favour any reference in the proposed deal to quantified targets for adaptation finance or contributions to the Green Climate Fund. Indeed, EU chief negotiator Elina Bardram described this as a “clear red line”.