Government says allowance will mean no charge for children 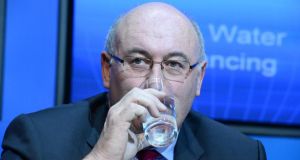 Minister for the Environment Phil Hogan at the launch of details of water charges at Government Buildings this morning. Photograph: Cyril Byrne /The Irish Times.

Irish homeowners will be given a free water allowance of 30,000 litres each year under proposals outlined by the Minister for the Environment Phil Hogan this afternoon.

While Mr Hogan claimed the allowance was “generous” it is substantially less than the 140,000 used by the average household.

Households will start to be billed for water usage in January next year.

The charging regime will remain fixed until end of 2016 and Mr Hogan declined to say what would happen after initial phase had finished.

As was widely anticipated this morning, plans for a standing charge of €50 have been dropped and charges will be capped for people with high water usage due to certain medical conditions.

“The regulator will finalise water charges in August but with these decisions, the conditions attached to the funding of Irish Water regarding the average annual water charge, and the fixing of charges to end of 2016, households now have high visibility in good time, as promised, of the likely level of charges,” Mr Hogan said.

The minister also announced a “free first fix” scheme for leaks and an accelerated metering programme.

Mr Hogan said his department had allocated an additional €200 million over two years for Irish Water’s capital investment which will include funding fro each household to have the first leak on their water supply pipe covered by Irish Water. After that, it will be each homeowner’s responsibility to identify and pay for leaks on their property to be fixed.

While there will be no standing charge for domestic customers “for social and environmental reasons” a minimum charge may be applied to properties that are not permanently occupied such as holiday homes);

Mr Hogan also said that Irish Water would have to take into account the quality of services provided to customers including circumstances where services are reduced or restricted due to boil water notices.

He said an accelerated metering programme would see the meters installed ahead in the middle of2016 - some six months ahead of target.

The Department is also exploring the potential to include a new phase of metering of some 48,000 apartments, which can be easily metered as part of a separate procurement.

Mr Hogan describe the free allowance as “generous” and said it was structured in “a way that reflects variations in household size and supports affordability. In particular, households with large families, or single occupants — two groups highlighted by the work of an inter-Departmental group on affordability measures and the ESRI as potentially vulnerable to affordability issues — are being protected.”

He also said he would issue directions to ensure that water charges are capped for people with high water usage due to certain medical conditions. This will include people on home kidney dialysis, and further work is underway to define other qualifying conditions.”

He said that at the heart of the Government’s programme was the fixing of a system “that is not fit for purpose”. He note that 23,500 people are on boil water notices and 40 per cent of the State’s water supply is lost on leakage