Hoopoe causing a hoopla in southeast as 50 exotic birds spotted 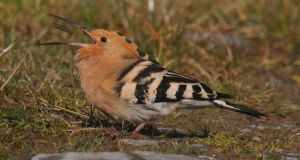 A hoopoe: it is 50 years since so many have been spotted in Ireland.

If you think you spotted an unusual pink bird with zebra-patterned wings in recent weeks, you are not alone.

The hoopoe, so called because of the sound it makes, has come to these shores in unexpectedly large numbers this year, with at least 50 being spotted, according to Birdwatch Ireland’s head of operations, Oran O’Sullivan. It is 50 years since so many hoopoes have been spotted here.

Usually, fewer than 10 are recorded in early spring or late autumn when migrating birds stray off course.

Mr O’Sullivan said the exotic birds, about the size of a starling or thrush, were a Mediterranean species, typically nesting in trees and olive groves.

“They have very big wings and when they take off you see a flash of black and white. When they land they throw up this crest, like an Indian chief’s head dress. They are exotic all the way.”

He said the birds wintered in Africa and could fly as far as northern France. “Even a few breed in the very far south of England. They come up in good weather and in spring they can overshoot France and hit Wexford.”