About 4,500 home and landowners could be affected by new Galway city bypass 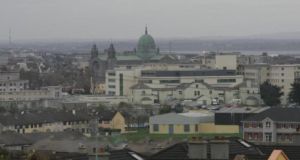 Residents whose houses could be demolished during construction of the proposed Galway city bypass never received notification about the plans, according to local homeowners. Photograph: Brenda Fitzsimons

Residents whose houses could be demolished during construction of the proposed Galway city bypass never received notification about the plans, according to local homeowners.

Galway County Council is currently holding a series of public consultations over plans to construct a new bypass, which will ease traffic congestion in the city.

Depending on which of the six proposed routes is chosen, anywhere between 20 and 130 houses stand to be demolished.

Of the 4,500 home and landowners who could be affected, the council sent letters out to approximately 400 whose properties are deemed to be particularly at risk.

However, Cappagh resident Kevin Gill says he and his partner only found out by chance that their family home may be subject to a Compulsory Purchase Order.

“They told me they didn’t send letters out to everybody, I asked them why but they didn’t provide an adequate answer,” the father of two said.

“What they’ve said is that we’re within the ‘corridor’, and said that if the house is likely to go then they’ll send letters out, but they weren’t undertaking to send letters to everybody,” Mr Gill added, who sought detailed information on the potential consequences of the plans after he was briefed by neighbours who had received letters.

Although he received correspondence indicating that his house in the western village of Keeraun could be demolished, he said this came a week after work had started on a new extension for which planning permission had been received last August.

“This is something that was trotted out to me that I find really difficult – saying that the people who want this are the multinational businesses. I’ve been a leader in the multinational industry for the last 30 years, the absence of a bypass has never been a deciding factor in additional jobs,” he said.

According to Sinn Féin councillor Cathal Ó Conchúir, numerous people he spoke to had received planning permission for sites along the proposed routes during the latter half of last year.

“Even at the public meetings I was asking people did they get a letter and they were saying no. One of the problems a lot of people found was that the scale of the map was so small that they couldn’t figure out if their house was in line for demolition or not,” he said.

Responding to accusations that the proposals had been communicated poorly, a spokesman for Galway County Council said dwelling owners who lived within 10 metres of the edge of a potential route were invited by letter to attend public consultations.

Despite the information offered, Keeraun native Ultan McDonagh said residents in the locality will be left in an untenable position if current plans are pursued.

“Our family has been on our farm for in excess of seven generations, I couldn’t even countenance the pain that a move would cause if we had to. The sad thing is that should the route go ahead, the community would be irreversibly destroyed,” he said.