Hogan 'concerned' over loss of Blue Flags at some beaches 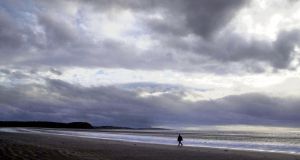 Minister for the Environment Phil Hogan has expressed concern over the loss of Blue Flag status for some Irish beaches over what he called a “statistical glitch” and has asked his department to raise the matter with the European Commmission.

Mr Hogan was speaking at the presentation of the awards in Dublin today.

The number of beaches around the country which have received the coveted Blue Flag award this year has dropped by 15 per cent compared to 2012.

Some 70 beaches and four marinas have been honoured with the flag – an overall drop of 13 on last year.

An Taisce – the organisation responsible for the operation of the Blue Flag programme in Ireland – said the drop could be attributed to stricter criteria that has been introduced.

The classification of the bathing water is now based on water samples from a four year period instead of results from a single bathing season.

“As a result, there was a predicted decrease in Blue Flags awarded in 2013,” said Ms Oliver.

“These programmes give a sound guarantee of excellent quality and standards to tourists and promote a sense of pride among local populations and beach management staff,” he added.

Popular bathing spots in the Dún Laoghaire-Rathdown area of Dublin welcomed a return to Blue Flag status with Seapoint and Killiney taking awards. The Royal Cork Yacht Club – a new marina – was the only other new addition.

The popular surfing location of Lahinch in Co Clare was stripped of its Blue Flag, along with Dublin beaches Donabate, Skerries South Beach, the Brook Beach Portrane, and the Velvet Strand in Portmarnock.

A number of other beaches that were awarded Blue Flags in 2012 missed out because of a failure to apply. These were Dollymount in Dublin City, old head in Mayo, Morriscastle in Wexford, Bunmahon in Waterford, and Cork beaches Redbarn, Garryvoe, Garretstown, and Barleycove.

Mullaghmore in Sligo could not be awarded the Blue Flag as a result of “ongoing issues with livestock roaming on the main beach area creating an unsafe environment for beach users”.

Mr Hogan noted this year was the first under which the beaches were being judged under the more stringent EU directive on bathing water and said it had been expected the overall number of Blue Flags might drop. “I acknowledge that this might be disappointing for some communities but we need to recognise that the bar is now set extremely high by the international Blue Flag programme and the new standard applies right across Europe. ”

He said the 2006 water quality directive had higher standards than the 1976 directive which had been used up to now. It was worth noting that most of the beaches where Blue Flags were lost achieved a higher grade under the old standard. If they hadn’t achieved the flag, this did not mean they had poor water quality, Mr Hogan said.

He said that because an excellent quality of water quality was now required as one of the “key determinants” for a blue flag, the consequences of this “statistical glitch” could be serious for some.

He understood that at least one of the beaches in Clare had lost its flag this year because of that. “I’m concerned about this matter and I have asked my department to raise the matter with the European Commission. ”

“I would exhort local authorities and communities to continue doing the work that they have been doing with a view to regaining the Blue Flag as quickly as possible."