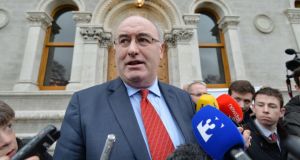 Minister for the Environment Phil Hogan has said he is “amazed” by the lack of awareness of the risks posed by radon gas. Photograph: Alan Betson/The Irish Times.

Minister for the Environment Phil Hogan has said he is “amazed” by the lack of awareness of the risks posed by the “silent killer” radon gas which causes up to 250 cases of lung cancer each year.

Publishing the government’s Radon Control Strategy in Kilkenny today, Mr Hogan said state agencies and Government needed to do more to highlight the health problems associated with the gas, which is a natural product of the decay of uranium in rocks and soil.

“The aim of the strategy is to minimise the exposure to radon gas of the general public,” he told the Radiological Protection Institute of Ireland’s (RPII) annual national radon forum.

“I never cease to be amazed by the number of people who haven’t a notion about the type of difficulties and type of problems, in terms of health, that radon can deliver to individuals. It’s not easy to create awareness but I think we need to be rather more pro-active in terms of public bodies or the education system to ensure that people are, at least, aware of it.”

Mr Hogan said he was putting together a “whole-Government approach” in the coming months to implement the new strategy.

“We’re all very good at having strategies but implementation is often more difficult and creates the greater challenges. It’s too serious, this particular strategy, to allow it to lie gathering dust.”

Mr Hogan said Taoiseach Enda Kenny was “very interested” in the issue, having raised it consistently in the Dáil “many years ago” and was “delighted” to learn about the new strategy.

The control strategy focuses on matters such as:

- reducing the incidence in existing houses by promoting radon testing and exchanging information on radon existence at the time of selling or renting out properties;

- ensuring the implementation of effective regulations relating to radon in the workplace and radon prevention in new buildings.

David Pollard, of the Radiological Protection Institute of Ireland, told the conference that radon is “a significant public health problem” which needs action.

About 7 per cent of Irish houses have a radon problem but many people put off doing anything about it because the harm occurs at some point in the future, he said.