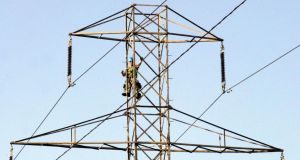 Opponents of Eirgrid’s plans for its Grid Link project to connect Leinster and Munster with a new 400kv overhead electricity line are expected to join forces with the North East Pylon Pressure Group.

Opponents of Eirgrid’s plans for its Grid Link project to connect Leinster and Munster with a new 400kv overhead electricity line are expected to join forces with the North East Pylon Pressure Group.

The group, known as Nepp, has been fighting plans by Eirgrid for a power line with more than 400 pylons linking Co Meath with Co Tyrone, via counties Cavan, Monaghan and Armagh, which was first announced in 2008.

When the case came before An Bord Pleanála in 2010, a 20-day oral hearing was aborted after it transpired that the height stated for the pylons was incorrect. Eirgrid is expected to make a fresh planning application shortly.

‘Monster’ meeting
A spokesman for Nepp said the purpose of a “monster wake-up meeting” in Trim, Co Meath, tomorrow evening was to “generate support for the second round of its campaign to have the power line put underground”.

With the launch in September of Eirgrid’s plan for a new power line linking Leinster and Munster, he said “this has now become a nationwide issue” and all of the political parties had been invited to attend the meeting in Trim.

Major concerns
Nepp insists that putting the power lines underground “is not only feasible but is the only way that the grid should be upgraded” because of major concerns about the impact of overhead lines on health, farming, property and the landscape.

Eirgrid has consistently said it would be uneconomic to put power lines underground in rural areas and that overhead power lines are the norm throughout Europe. Its plans have been endorsed by Chambers Ireland as being “vital for business”.

Tomorrow’s meeting takes place at the Knightsbrook Hotel in Trim, starting at 8pm.