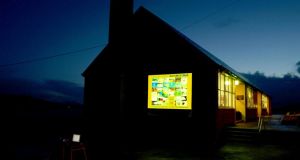 Striking images by North Mayo schoolchildren of their Atlantic seascape and natural habitat have been captured for an international audience, following an outdoor “lightshow” of their work over the weekend.

Musician Martin Hayes and renowned photographer Amelia Stein lent their support to the project involving pupils of Ceathrú Thaidgh primary school in a remote corner of the Erris peninsula.

Entitled Dórdán Dúlra - Nature’s Call, the initiative aims to raise awareness of the Sruwaddaccon bay area and to challenge the public perception of “confrontation and high vis-jackets” associated with the Corrib gas project nearby.

A school building provided the outdoor screen for the lightshow, with artwork by 31 pupils projected onto its gable end under a starlit sky while a nearby “seanscoil” or old school was illuminated in green.

The children in the Gaeltacht school had been asked by their teachers, Bríd Ní Sheighin and Nessa Ní Chiaráin, to record their impressions of their immediate surroundings, according to project co-ordinator Treasa Ní Ghearraigh.

Molly Ní Ghearbháin (7) in first class was inspired by a heron - known as “máire fhada” - while the “straidhpeanna” or local field systems were depicted by senior infant pupil Chelsea Ní Chuirleán (6).

Impressions of an ox-eyed daisy by Jasmine Ní Mhuirithe (8), sea stacks by Dónal Ó Gearbháin (11) and furze in bloom by Marcus Ó hÉalai (13) were also projected, while other classmates focused on inshore fishing and the local coastline opening out into Broadhaven Bay.

Commentary during the show was provided by Seámus Ó Mongáin, with both pupils, their parents and members of the wider community attending. Shamrock-shaped biscuits and green-iced cakes provided sustenance in the schoolroom after the event.

Photographer Amelia Stein, who worked with the community on the exhibition, paid tribute to the children for their enthusiasm and noted that the “seeds had been sown” for a greater awareness of the beauty of the landscape.

Musician Martin Hayes has provided the backdrop for a slideshow of the children’s images, with bilingual captions transmitted to US environmental website www.ecology.com

“They couldn't have a more magical setting, within the beautiful land, sea and skyscapes of north Mayo,” Janis Blackschleger of the US website has noted. Divided opinions on the Corrib gas project over the past decade have taken their toll on the community.

Treasa Ní Ghearraigh said that it showed what could be done, with no funding and “lots of goodwill”.

1 Production at Brady’s Ham plant in Kildare stops after 80 staff test positive for Covid-19
2 How a ship abandoned by its owner brought deadly cargo to Beirut
3 Masks Q&A: Who has to wear them in shops and what happens if you don’t?
4 Officials refuse to rule out ‘Midlands lockdown’ following Covid-19 surge
5 Coronavirus: Residents in Kildare, Laois and Offaly urged to take extra care after cases spike
Real news has value SUBSCRIBE