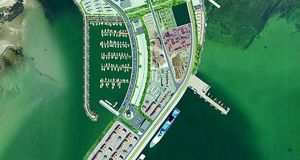 A €126 million project to build a new deepwater port on land reclaimed from Galway Bay will not exacerbate the city’s vulnerability to flooding, according to its designers.

A €126 million project to build a new deepwater port on land reclaimed from Galway Bay will not exacerbate the city’s vulnerability to flooding, according to its designers.

“Worst case scenario” modelling to allow for a half metre sea level rise and a 20 per cent increase in the river Corrib’s flood rate has been carried out on the masterplan, submitted this week to An Bord Pleanála under the Strategic Infrastructure Act.

Severe weather
“With climate change we will have more regular severe weather events – but with or without this development, the city is going to flood,” harbourmaster Capt Brian Sheridan said yesterday, when details of the project were outlined.

Galway is predicted to experience its highest astronomical tide in the current 18.6-year lunar cycle on September 28th, 2015, at 5.74m – just 5mm higher than the high spring tide of January 3rd when the Corrib burst its banks at Spanish Arch, he said. The four-phase port extension plan involves reclaiming 27ha of environmentally sensitive bay area to move the existing port south and provide deepwater berths for cruise ships and commercial vessels.

The harbour company says it is being transparent about the environmental impact, and has consulted with the European Commission on approval under a little-known clause of the EU habitats directive.

The IROPI (imperative reasons of overriding public interest) provision under article 6 (4) of the EU habitats directive involve offering compensation for loss of fragile environment. The mechanism was first used to seek approval for a motorway in Hessen, Germany.

Member states are required to take “all compensatory measures necessary” to ensure that environmentally fragile sites, designated under Natura 2000, are protected, and the European Commission has to be informed.

No details were forthcoming yesterday on likely compensatory measures, such as an alternative habitat designation, but going farther out into the bay is believed to be one of a number of options. Other elements of the project include a 216-berth marina and a rail freight link. The harbour company says a “mini Sydney opera house” could be built on a centre pier. The existing harbour, which has a small marina, will be developed for leisure purposes.

City of culture
The city is bidding for European city of culture designation in 2020 and Capt Sheridan believes the Volvo Ocean Race, which has been in Galway twice, might return by then.

The gated harbour cannot cater for ships over 7,000 tonnes, and is operating at one-sixth of its capacity due to the tidal restrictions, Capt Sheridan said.

A deepwater multi-modal port could service the oil and gas business, renewal energy including offshore wind and wave, cruise liner traffic and a new marina would give a fillip to marine tourism in the west, he said.

The harbour company has spent €3 million on preparing the plan to date, first initiated seven years ago on a larger scale.The first phase, costed at €52 million, could begin next year, if approved, with the remaining three stages completed by 2017.