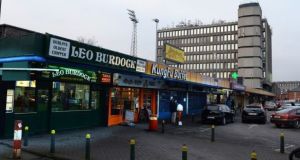 Councillors sought to amend the plan so that any new building on this site could be a maximum of 28m, about 3m shorter than the existing shopping centre tower. Photograph: The Irish Times

A building up to 50m tall could be permitted in Phibsborough following the failure of Dublin city councillors to approve a local development plan for the village.

Councillors had sought to restrict the area to low-rise buildings, but the fall of the Phibsborough Local Area Plan means one of the tallest buildings in the city could be built in the heart of the village.

Minister for Transport Paschal Donohoe has described the councillors’ decision as “inexplicable” and a “fiasco” which would leave the suburb ill prepared for future development.

The plan would have governed the development of the largely Victorian suburb in the north of the city up to 2021, by which time it will have a Luas line and 20,000 students at the DIT campus at Grangegorman.

The draft plan presented to councillors for approval three weeks ago following extensive public consultation, included proposals for a tower up to 37m tall at the shopping centre site. Opened in 1968, the shopping centre is in the control of Nama and is on sale with a guide price of €15 million.

Councillors sought to amend the plan so that any new building on this site could be a maximum of 28m, about 3m shorter than the existing shopping centre tower. This change would have required the plan to be reissued for another round of public consultation.

To prevent this councillors last week agreed a compromise amendment, which would have allowed any new owner to have one extra storey over the height of existing building, a measure which did not require new public consultation and would have allowed the plan to be passed.

However, despite having voted in favour or the amendment, an insufficient number of councillors voted to ratify the plan.

To pass the plan more than half the 63 councillors had to vote in favour, but only 43 councillors were present for the vote and while 31 voted in favour, the plan could not be passed and has now been scrapped.

This means that the future development of Phibsborough will be governed by the principals of the current city development plan, which allows a building of up to 50 metres at the shopping centre.

“Last week’s vote represented the largest planning setback for Phibsborough in a decade. It is inexplicable to me how councillors felt their community would be better off without a specific plan for their area,” said Mr Donohoe, who is also a TD for the area.

“Phibsborough is on the cusp of so many good things, expansion of Luas, redevelopment of Dalymount, growth of DIT Grangegorman. For all this to happen without an area plan would be little short of a disaster.”

The new plan was designed to replace the earlier Phibsborough and Mountjoy local area plan, published in 2008 but never implemented. Changes in Government schemes for the area and the collapse of proposed private developments have made several provisions of the previous plan obsolete, necessitating new planning criteria for the area.

The 2008 plan was based on Government policy to close Mountjoy Prison and relocate it to Thornton Hall, and to build a new national children’s hospital at the Mater hospital. At the same time, Bohemians football club had plans to leave Dalymount Park, and there were proposals for a new “village centre” on the combined site of Dalymount and the shopping centre.

The prison is for the foreseeable future staying put, and the children’s hospital is going to St James’s on the other side of the city.

Bohemians is to stay also, with the council earlier this year having bought the ground for €3.8 million to retain it as a sports facility.