Surveillance flights by private aircraft have cost €45,000 to date 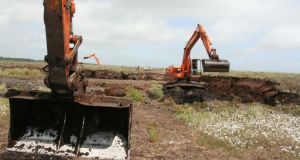 Turf-cutting on the raised bog in Monivea, Co Galway over the weekend. Photograph: David Walsh

The European Commission has warned it may take legal action against Ireland if illegal turf-cutting continues on protected raised bogs.

The commission says it expressed “serious concerns” about the illegal activity – most recently in the midlands and west – at a meeting with Irish officials this week.

The activity is undermining the “important strategic measures being developed by the Irish authorities”, and is forcing the State to “devote resources to take effective enforcement action”, the commission said yesterday.

The warning from Europe was issued as the Department of Arts, Heritage and the Gaeltacht confirmed that some €45,206.52 has been spent to date on using fixed-wing aircraft for surveillance of turf-cutting on protected bogland.

The figure, issued to Nuacht TG4, refers to private aircraft hire since June 2012. The bill does not include the use of Air Corps fixed-wing aircraft that have been deployed with National Parks and Wildlife Service staff on board.