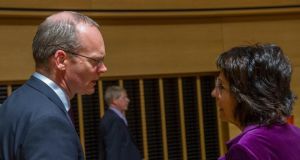 EU agriculture and fisheries ministers have agreed on measures to help the EU fishing industry in the wake of the Russian embargo on EU fish products.

Ireland is the third- largest EU exporter of pelagic fish - including mackerel and herring – to Russia.

While Ireland does not sell Celtic Sea herring to Russia, its price has fallen by 40 per cent due to the export ban.

Ministers agreed today to allow greater flexibility on inter-year transfers of quota, effectively allowing member states to “bank” some of their fishing quota ahead of next year when prices improve.

Member states will now be allowed to 25 per cent of their mackerel quota to be “banked”’ for this year, while the Commission is considering allowing similar measures for horse mackerel and Celtic Sea herring, provided that scientific research shows it is not harmful environmentally.

“This is a big win for us,” Minister for Marine Simon Coveney said today. “We have been pushing very hard for this measure. There are not that many countries that are affected by the Russian ban on fish.”

Pointing out that incoming EU Commissioner Phil Hogan has already indicated his view that support measures should come from other avenues within the EU budget, Mr Coveney said he was hopeful of a change of stance from Brussels with the incoming Commission.

The European Commission has already announced €30 million in support for EU farmers in the wake of the Russian ban, as well as market support measures for perishable fruit and vegetables and the activation of special storage arrangements for dairy products.

As well as impacting the sale of products into Russia, particularly from east European exporters, the Russian ban has also led to a steep fall in prices for key agricultural products across the board.

EU agriculture ministers are also discussing how to respond to the sharp drop in milk prices as a result of the Russian ban on milk coming from the three Balkan countries and Finland.

“We have already seen prices coming down in Ireland. We are pushing the Commission to introduce the appropriate market management tool so that we act early to respond to any significant weakening of milk prices.”

This could include an export refund system, intervention pricing or aid for private storage.