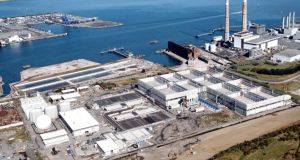 Raw sewage is being discharged into 45 rivers, lakes and coastal areas around the State, the Environmental Protection Agency (EPA) has said.

Of the 45 areas where raw sewage was discharged, 27 (60 per cent) were located in counties Cork, Donegal and Galway. Waste water received no treatment or “preliminary treatment only” prior to discharge.

The EPA said failure to properly treat sewage “can pose a risk to human health and the aquatic environment”.

In terms of effluent quality from sewage treatment plants, the Ringsend Waste Water Treatment Works, which serves 2.1 million people in the greater Dublin area, failed the compliance test due to “quality”. Just 24 per cent of waste water discharged into “sensitive areas” from large towns and cities complied with mandatory EU nutrient quality standards. This was up from 17.5 per cent in 2013.

A statement from Irish Water said the discharge of untreated sewage at 45 urban locations “will end by 2021” and that “significant progress” had been made in addressing the “most serious deficiencies” with Ireland’s waste- water treatment. It said €320 million has been invested in waste-water infrastructure.