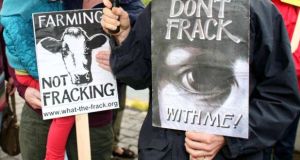 The Environmental Protection Agency (EPA) has denied accusations it commissioned a “cheerleader” of the fracking industry to help carry out a major study on the gas extraction method.

Fianna Fáil Senator Paschal Mooney said he had “serious concern” about the independence of a two-year study into fracking because of the involvement of consultancy firm CDM Smith.

The company has advised on exploratory gas extraction projects in the United States and Europe, and will work in conjunction with bodies including UCD, Queens University and the British Geological Survey to compile a series of reports next year on fracking.

“CDM Smith are cheerleaders for the fracking industry... It was an extraordinary decision in my mind to engage them,” said Sinn Féin TD Michael Colreavy.

No commercial licenses for fracking have been issued in the Republic of Ireland and the Government is awaiting the outcome of the EPA study – expected in July 2016 – before deciding on a definite policy.

Opponents of fracking have cited concerns about contamination of water supplies, environmental pollution and increased seismic activity caused by the process.

The EPA said these factors will be taken into account as part of the study. “I have to reiterate, no hydraulic fracturing is going to happen as part of this research, no exploratory license is going to be issued until this research is finished, and all regulatory processes come into play if and when some private entity decides to go in for it [fracking],” said Mr Lynott, who defended the role of CDM Smith.

“All of the consortium members were required to sign a conflict of interest form, which they did. We are happy that the group that is doing the research is eminently qualified, will do the research in a peered-reviewed manner, independent, and will be fit for purpose.

“In my view we have a very independent and robust system, the same system we used for all of the €74 million worth of studies that we have commissioned since 2007.”

Roscommon-South Leitrim Independent TD Denis Naughton criticised the record of another consultancy organisation in the consortium.

“Amec Foster Wheeler was the company that constructed the two peat-fired power stations, one in Shannonbridge and one in Lanesborough, and as we know they made a miscalculation regarding the acidity in the peat which led to both of those plants having to be shut down and completely refitted.

“Even some of the best consultants, sometimes they get it wrong as well,” he said.