Environmentalism ‘tends to be against things’, says the biographer of the influential Aldo Leopold. We also need to fight for things, according to Curt Meine 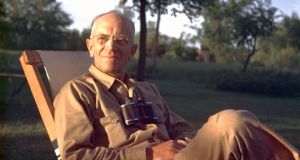 Green Fire: Aldo Leopold is more highly regarded as a conservation thinker even than Henry David Thoreau and Rachel Carson 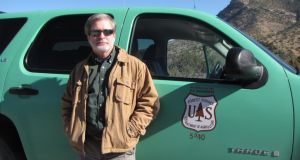 Green Fire: “Aldo Leopold was a critical thinker, critical of his own earlier work, always revising. So if there is any lesson it is that we should be critical thinkers ourselves, not just use him as an authority figure to appeal to,” says Curt Meine, who narrates the documentary

Aldo Leopold is not well known in Europe, but for many Americans he is the central figure in their pantheon of great conservation thinkers, more highly regarded even than Henry David Thoreau and Rachel Carson.

The attention he receives in the United States mostly came long after his untimely death, as he was helping to extinguish a fire on a neighbour’s farm in 1948, at the age of 61. When, today, that attention becomes adulation it can become problematic. One experienced land manager in the US has told me of his frustration when conservation proposals that he makes are greeted with statements such as: “Leopold would never have suggested something like that.”

A group of environmental-studies postgraduates at the University of Illinois told me that they regard his classic collection of essays, A Sand County Almanac: And Sketches Here and There, as essential reading. But they added that some people read his work, particularly his frequently quoted essay The Land Ethic, “as if they were reading the Bible”.

Few know Leopold’s texts better than the historian Curt Meine. He is Leopold’s biographer and the narrator of Green Fire, a documentary about the contemporary relevance of Leopold’s thinking that will be screened this month at the Irish Film Institute.

Meine lives in a classic Wisconsin farmhouse, complete with red barn. It is not far from Leopold’s fabled “shack”, the main location of his vivid and exquisitely written account of the local natural year in The Sand County Almanac. There is a remnant patch of tallgrass prairie on the dramatic sandstone bluff above Meine’s house. He and his landlord are attempting to bring it back to something like its former glory.

Sandhill cranes, the subject of one of Leopold’s most beautiful essays, Marshland Elegy, often feed in dozens, sometimes hundreds, on nearby meadows and cornfields. Leopold thought they were doomed to extinction in the 1940s. Now they nest in thousands in Wisconsin alone. Some things do change for the better.

Meine responds wryly to the land manager’s complaint and to the students’ comments. “In almost every talk I give about Leopold,” he says, “I tell people at the outset that I’m not going to answer any questions about what he would say to us today.

“Leopold was a critical thinker, critical of his own earlier work, always revising. So if there is any lesson it is that we should be critical thinkers ourselves, not just use him as an authority figure to appeal to. In The Land Ethic essay, ironically, Leopold himself writes that no individual can write an ethic: it evolves ‘in the minds of a thinking community’.”

Meine believes it’s up to us to develop that ethic for contemporary conditions. “As a historian I believe it’s vital that we understand what he said in the particular context of his own life and times.”

Yet Meine argues passionately and lucidly that Leopold has great relevance to many of the painful controversies about society and the environment today. For Meine, a central but often ignored point is that Leopold was not an environmentalist but a conservationist. Most of us use these words interchangeably. What’s the difference, and why is it important?

“Yes. We’d be in a much worse mess today without environmentalism,” Meine agrees. “But it is primarily an urban movement, concerned with politics. It tends to be against things. We need to fight for things as well. Leopold said that there is ‘no hope for conservation born of fear’.”

Conservationism, Meine continues, is much older, with a much broader and deeper reach in society, especially in rural areas and farming communities.

Many of Leopold’s insights, he says, derive from his early personal history as a hunter, and his profession as a forester and land manager, first serving the hunting fraternity and ranchers in the western states, then advising Midwestern farmers on the restoration of degraded soil during the Dust Bowl crisis of the 1930s.

Leopold made big mistakes, but he learned from them. The film’s title, Green Fire, refers to the dying light in the eyes of a wolf he had shot early in his career. He was working under the impression that eradicating predators would enhance deer numbers for hunters. Instead, without wolves, the deer population exploded but then crashed; it had rapidly degraded its own habitat through overgrazing.

Leopold’s marriage, to a Mexican-American from a leading ranching family, also influenced him deeply. As the film script puts it, this relationship “gave Leopold a very keen appreciation of the cultural dimensions of conservation. It would feed his understanding that conservation is not only about the land’s ecological relationships but also about our own communities and cultures.”

Leopold’s extensive writings have left us essays that stand proud among both the most closely observed and the most beautifully evocative writing in natural-history literature. But he was ruthlessly unsentimental and insistent that nothing lasting could be achieved without a conservation ethic that included people as well as ecosystems.

Bill McDonald, an Arizona cattle rancher and conservationist, gives contemporary expression to Leopold’s land ethic in Green Fire, in lines that Meine repeats in conversation: “We used to say it’s all about the land. But it’s not: it’s all about the people. It would always come down to personal relationships and trying to get folks to work together.”

Arizona is not Abbeyleix, but this sounds pretty familiar.

– All ethics so far evolved rest on a single premise: that the individual is a member of a community of interdependent parts.

– The land ethic simply enlarges the boundaries of the community to include soils, waters, plants and animals, or, collectively: the land.

– We abuse land because we regard it as a commodity belonging to us. When we see land as a community to which we belong, we may begin to use it with love and respect.

– Our tools are better than we are, and grow better faster than we do. They suffice to crack the atom, to command the tides. But they do not suffice for the oldest task in human history: to live on a piece of land without spoiling it.

– Conservation will ultimately boil down to rewarding the private landowner who conserves the public interest.

– Recreational development is a job not of building roads into lovely country but of building receptivity into the still unlovely human mind.

– Conservation, without a keen realisation of its vital conflicts, fails to rate as authentic human drama. It falls to the level of a mere utopian dream.

These ideas come from The Essential Aldo Leopold, published by University of Wisconsin Press

Paddy Woodworth will chair a discussion with a conservationist, a farmer, an academic and a film-maker after the screening of Green Fire at the Irish Film Institute, in Dublin, on Tuesday, April 26th; ifi.ie/film/green-fire-panel-discussion