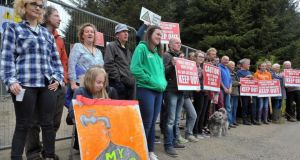 Woodburn forest in Co Antrim has become the focus for an environmental battle between geologists exploring for oil and local people concerned about pollution and water contamination.

Last Tuesday, oil exploration company InfraStrata began drilling for oil on land owned by NI Water at Woodburn forest, which is close to Carrickfergus and about 20km from Belfast.

The well will be drilled to a depth of 2,000m. InfraStrata chief executive Andrew Hindle had told shareholders it could yield 25 million barrels of oil.

While East Antrim DUP MP Sammy Wilson said he hoped Carrickfergus would yield as much oil as there was in Texas, that decidedly is not the view of the protesters at the “Stop the Drill” camp on the Paisley Road.

Nor are they convinced by assurances from NI Water and the Northern Ireland Environment Agency that the exploration project poses no threat to water supplies.

Since work started on the site in February, Pauline Cowan, from the nearby hamlet of Glenoe, has been regularly collecting her seven-year-old granddaughter Eabha to drive up to the protest camp.

People come and go throughout the day, bringing food and drink to the camp, or just turning up to show solidarity with the protesters. They are supported by parties and organisations such as the Greens, People Before Profit and Friends of the Earth.

Even Hollywood star Mark Ruffalo has lent his support to the campaign. The PSNI keeps a watching brief.

From the vantage point of the tower it is clear this is a big operation.

The site, about the size of a couple of football pitches, is enclosed by green steel fencing topped with razor wire.

Close to the centre of the compound, a big drill pounds away into the ground, conjuring images of drilling scenes from the film There Will be Blood. Workers in hard hats go about their business, while the site is crowded with lorries, generators, tanks and equipment.

After much preparatory work, drilling finally started last week. InfraStrata, which says the exploratory work will take about six weeks, is hopeful of striking oil deep under the forest.

Cowan is unimpressed: “If there is oil, who will it bring profit to? It will bring profit to the company. It won’t benefit the average Joe who has to go out and fill his oil tank.”

Her prime concern is water contamination. “I oppose this project for quite a few different reasons, but number one is that there is a danger to the water catchment area, to the reservoir that supplies drinking water for 130,000 homes in Carrickfergus, Belfast, Whitehead and a little bit of Antrim. That in itself is enough for me,” she says.

Cowan and the other protesters are unconvinced by assurances from NI Water, InfraStrata and the Northern Ireland Environment Agency that no such threat exists. They point to two oil spills at the site which NI Water and the environment agency described as “minor” incidents that did not threaten or contaminate the water supply.

Michael Buckley, who farms locally, says not only is he worried about the water supply but is anxious that were InfraStrata to find oil, the possible consequent development could undermine house prices.

“I am worried that the chemicals will pollute the water and on a very personal note I am worried about the value of our property,” he says.

InfraStrata has insisted its work poses no danger to the water supply, but generally has shied away from getting involved directly in the public wrangle over the project.

It has been left to NI Water to do most of the PR work in seeking to persuade the public that there is no threat of water contamination.

A spokeswoman for NI Water, however, said InfraStrata had been prohibited from “fracking both now and in the future”.

She denied a claim by Boyd Barrett that NI Water had to “close three reservoirs” because of the danger of contamination. The spokeswoman said no reservoirs had been closed.

Instead, NI Water had taken action to ensure no water from a nearby river was diverted into two reservoirs in the area.

“What NI Water has done, however, is to take the drill site out of the water catchment area – this is a ‘belt and braces’ approach, as the drill site is zero discharge,” she said.

The spokeswoman said NI Water and the environment agency, as well as InfraStrata, carried out regular monitoring and sampling of the water from the Woodburn Forest site. “Following a detailed risk assessment, NI Water is satisfied that the exploratory drill at Woodburn represents no threat to the water supply,” she said.

Wilson says many local people support the exploration and hope oil will be found. He is dismissive of the protesters: “This is just a bunch of Green agitators who are opposed to fossil fuels and who are seeking to scare the devil out of the people of the area.

“I hope they find as much oil in Carrickfergus as there is in Texas.

“If it becomes the centre of the oil industry in the UK I will be over the moon in terms of investment for the area, jobs for the area, the potential for spin-off industry. It will be like Christmas come early.”